The submandibular salivary gland (SMG) may be excised for chronic sialadenitis, sialectasis, sialolithiasis, benign and malignant tumours, and as part of a neck dissecttion. The use of sialendoscopy is likely to reduce the frequency of SMG excision for sialolithiasis.

The key concerns for the patient are the surgical scar, and injury to the marginal mandibular, lingual and hypoglossal nerves.

The SMG has both an oral and cervical component. It passes around the posterior free margin of the mylohyoid muscle, which forms the “diaphragm” of the mouth and separates the cervical and oral components of the gland. The SMG is situated mainly in the submandibular triangle (Level 1b) of the neck. The oral component extends some distance along the submandibular duct immediately deep to the mucosa of the floor of the mouth (Figure 1). The duct opens close to the midline in the anterior floor of mouth. The cervical part of the gland is immediately deep to the platysma and is encapsulated by the investing layer of the deep cervical fascia.

The digastric muscle forms the anteroinferior and posteroinferior boundaries of the submandibular triangle (Figure 2). It is an important surgical landmark as there are no important structures lateral to the muscle. The facial artery emerges from immediately medial to the posterior belly, and the XIIn runs immediately deep to the digastric tendon.

The mylohyoid muscle is a flat muscle attached to the mylohyoid line on the inner aspect of the mandible, the body of the hyoid bone, and by a midline raphe to the opposite muscle (Figures 1, 2, 4, 8). It is a key structure when excising the SMG, as it forms the floor of the mouth, and separates the cervical from the oral part of the SMG. Of importance to the surgeon is that there are no important vascular or neurological structures superficial to the mylohyoid; the lingual and XIIn are both deep to the muscle. The marginal mandibular nerve is at risk of injury as it runs within the investing layers of deep cervical fascia overlying the gland, and may loop up to 3cms below the ramus of the mandible. It comprises up to 4 parallel running branches. It crosses over the facial artery and vein before ascending to innervate the depressor anguli oris muscle of the lower lip (Figure 3). In order to minimise the risk of injury to the nerve, one should incise skin and platysma at least 3cms below the mandible, and incise the fascial covering of the SMG just above the hyoid and do a subcapsular resection of the SMG. The lingual nerve is a large, flat nerve, and runs in the lateral floor of mouth above the SMG, and sends secretomotor nerve fibres to the submandibular ganglion which innervate the SMG (Figures 1 & 4). It comes into view during SMG excision when the SMG is retracted inferiorly, and the mylohyoid is retracted anteriorly.

The XIIn is covered by a thin layer of fascia, distinct from the SMG capsule, and is accompanied by thin walled ranine veins that are easily torn at surgery (Figure 5). Figure 4: Note the submandibular ganglion, nerve to mylohyoid and how the lingual nerve swerves around the duct Figure 6: Diathermy tip points to the nerve to mylohyoid crossing the mylohyoid muscle Figure 7: Veins of head and neck

The facial artery is identified during excision of the SMG. It enters the submandibular triangle posteroinferiorly from behind the posterior belly of digastric and hyoid, courses across the posteromedial surface of the SMG, and reappears at the superior aspect of the SMG where it joins the facial vein to cross the mandible (Figures 3 & 8). A few anterior branches enter the SMG and have to be divided if the surgeon elects to preserve the artery during resection of the SMG e.g. when a buccinator, nasolabial or submental artery flap is planned (Figures 8 & 9).

The submental artery island flap is based on the submental branch of the facial artery which courses along the inferior, inner margin of the mandible (Figures 8). Figure 8: The facial artery emerges from behind the posterior belly of digastric (removed), and gives rise to a few branches including the submental artery The anaesthetist should avoid muscle paralysis as it is useful to monitor movement of the lower lip should the marginal mandibular nerve be surgically irritated.

The patient is placed in a supine position with neck extended and the head rotated to the opposite side. The skin of the anterior neck and lower face is sterilised. Draping is done in such a way that the lower lip, lower margin of the mandible, and upper neck are exposed.

Incision of skin and platysma

A horizontal incision is placed in a skin crease at least 3cms below the mandible or at the level of the hyoid bone, extending anteriorly from the anterior border of the sternocleidomastoid muscle (Figure 8). The incision is carried through skin, subcutaneous tissue and platysma to expose the capsule of the SMG, the facial vein and posteriorly, the external jugular vein (Figure 9).

The facial vein is ligated and divided where it crosses the SMG (Figure 10).

The fascial capsule of the SMG is incised with cautery or a knife parallel to and just above the hyoid bone to expose the SMG. By applying inferiorly directed traction to the SMG, a subcapsular dissection with exposure of the SMG is done with cautery (Figure 11). Contraction of the angle of the mouth alerts the surgeon to the proximity of the marginal mandibular nerve. Once the superior margin of the SMG has been reached, then the surgeon dissects bluntly with a haemostat in the fatty tissue above the gland to identify the facial artery and vein keeping immediately above the SMG to avoid injury to the marginal mandibular nerve (Figure 12). Although not essential to do so, the marginal mandibular nerve may be exposed where it crosses the facial artery and vein by careful blunt dissection (Figures 3 & 12). Avoid using monopolar cautery in the proximity of the nerve. The surgeon then divides and ligates the facial artery and vein close to SMG to avoid injury to marginal mandibular nerve.

The surgeon next frees the anterior margin of the SMG from the anterior belly of digastric with electrocautery dissection, and proceeds in a posterior direction, elevating the SMG from the lateral surface of the mylohyoid muscle. The only structures of note that one encounters during this part of the dissection are the mylohyoid nerve and vessels (Figures 6, 13). By dividing these vessels with electrocautery, one gains free access to the posterior part of the mylohyoid muscle (Figures 13 & 14). Figure 13: Front-to-back mobilisation of SMG off mylohyoid muscle, and division of mylohyoid nerve and vessels

Next skeletonise the posterior free margin of the mylohyoid with diathermy or scissors with the knowledge that the XIIn, ranine veins and lingual nerve are all immediately deep to the muscle and are exposed and vulnerable to injury immediately posterior to the muscle (Figure 14).

By retracting the mylohyoid anteriorly and by using careful finger dissection, the lingual nerve, submandibular ganglion, and submandibular duct come into view (Figure 15). 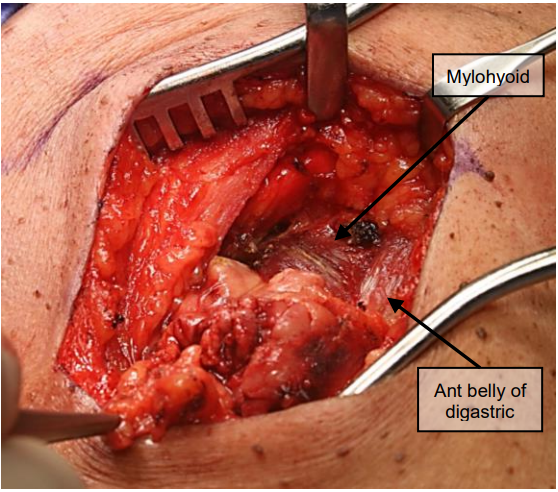 An index finger is passed in the welldefined interfascial plane that exists between the SMG and submandibular ganglion laterally, and the fascia covering the XIIn and ranine veins medially (Figure 16). The finger exits posteriorly cephalad to the facial artery where it emerges from behind the posterior belly of the digastric muscle. Once the XIIn nerve has been identified, one may safely clamp, divide and ligate the submandibular duct and the branch of the lingual nerve to the submandibular ganglion, taking care not to place the tie across the lingual nerve (Figure 17). With surgery for sialolithiasis one should follow and divide the duct more anteriorly in the floor of the mouth to avoid leave behind a calculus. The SMG can then be reflected inferiorly, and the facial artery is identified, ligated and divided where if exits from behind the posterior belly of digastric (Figure 18). The SMG is then finally freed from the tendon and posterior belly of the digastric and removed. The final view of the resection demonstrates the XIIn, ranine veins, lingual nerve, and transected duct all on the lateral aspect of the hyoglossus muscle, and the facial artery (Figure 19). The wound is irrigated and closed in layers with vicryl to platysma and subcuticular suture to skin. A suction drain is left in situ.