Almost any mass or tumour requires cytological or histological diagnosis before a management plan can be formulated. Performing tissue biopsy of masses and lymph nodes of the head and neck fills many junior doctors with fear due to the complex anatomy and the vascular structures and nerves that traverse the head and neck. Yet diagnostic material can be safely obtained from most masses in the head and neck in an ambulatory care setting.

Tumours of the upper aerodigestive tract are ideally biopsied directly either transorally or transnasally. Subcutaneous tumours are first sampled by the least invasive technique; only if the diagnosis remains in doubt does one employ progressively more invasive biopsy techniques until a diagnosis is made. A typical diagnostic sequence is: FNAC - core biopsy - open surgical biopsy.

What do pathologists require to make a diagnosis?

Clinical detail: A pathologist’s differential diagnosis and types of pathological tests are informed by the clinical information; this is particularly important with FNAC. 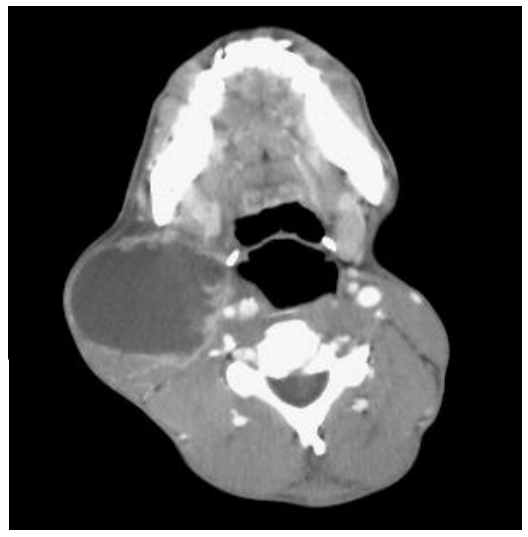 This is a technique whereby a cytologic diagnosis is made on an aspirate of cellular material that has been collected through a small-calibre needle and smeared and fixed on a glass microscope slide. In the absence of an obvious primary tumour, FNAC is generally the 1st line investigation of a neck mass. Because the relationship of tumour cells to the basement membrane cannot be determined on cytology, the cytologist is unable to distinguish between high grade dysplasia (carcinoma in situ) and invasive carcinoma; this distinction can only be made on histological examination of a tissue biopsy that includes the basement membrane.

FNAC is particularly useful in the head and neck for the following reasons:

The authors do not use local anaesthesia as the additional needle stick for the anaesthetic also causes discomfort and the anaesthetic solution may obscure a small mass. FNAC is done either with the patient sitting in a chair or lying down. With FNAC of the thyroid the neck may be hyperextended over a bolster placed under the shoulders. Access to lymph nodes along the jugular chain may be improved by turning the head. If possible, the mass is fixed between the fingers of the nondominant hand.

Masses in Level 1b of the neck may be more accessible and better stabilised by displacing them inferolaterally with a finger placed in the lateral floor of mouth. Great care should however be taken not to pierce the operator’s finger in the mouth with the tip of the needle.

Ultrasound-guided (USGFNAC) or CTguided FNAC may be done for masses that are difficult to access with confidence e.g. deep-seated masses in the deep lobe of parotid or parapharyngeal space, or smaller masses.

Also known as the fine-needle capillary method, this is the authors’ preferred method. It relies on capillary action to draw sheared cells up a small-calibre needle. The non-aspiration technique is easier to perform than aspiration technique, improves the operator’s ability to direct the needle tip into a smaller mass, and is less likely to cause a bloody aspirate which is particularly advantageous with vascular structures such as thyroid gland.

The aspiration technique employs negative pressure generated by a syringe as well as the shearing effect of the needle, to aspirate cellular material from a mass. A pistol grip syringe holder can be used as it allows more uniform suction and makes it easier to direct the needle (Figure 4). Figures 4a, b: Example of pistol grip syringe holder

As soon as the aspirate has been ejected onto the glass microscope slide, a 2nd microscope slide is used to smear the cellular material into a monolayer of cells for microscopic examination (Figure 5).

Figure 6 illustrates two techniques that may be used to create a thin film. The “pull-push” smear technique is only applicable to liquid aspirates. The authors favour the so-called “crush” technique for FNAC of solid tumours which involves gently smearing the tissue between two opposing glass slides. Figure 5: Example of a smear showing oncocytic cells and lymphocytes that is too thick on the left, and a desired thickness (monolayer) on the right Smears are immediately fixed to avoid shrinkage artefact. This is achieved by either wet fixation or air-drying. Consult your cytopathologists about their preferred fixation method. As different stains are used for each technique, some prefer using both techniques for the same specimen, as the two methods can produce complementary results.

This is achieved by dipping the slide into 95% ethanol solution, or by applying a spray fixative (Figure 3). Spray fixatives typically consist of an admixture of polyethylene glycol and ethyl alcohol or isopropyl alcohol. The alcohol evaporates and leaves the glycol covering the smear. Material fixed by wet-fixation technique can be stained both with Papanicolaou (PAP) and haematoxylin-eosin (H&E) stains (Figure 7). The smeared material is allowed to air-dry; drying should be quick and may be aided with a hairdryer or a fan. The WrightGiemsa stain is used for air-dried smears.

Label the slides with the patient's details and the origin of the aspirate. The slides in Figure 8 have been sandblasted at one end so that details can be written on the slide with pencil. Figure 8: Sandblasted end of slides for labelling with pencil

This technique is useful for hypocellular aspirates. Instead of being spread onto a glass slide, the material obtained by aspiration or by cytobrushing is transferred to a vial of fixative. The vial is then centrifuged, and the sediment is used for the smear.

Brush cytology is cheap, non-invasive, and virtually painless and requires minimal training. Although it is highly specific, it is less sensitive i.e. negative brush cytology does not rule out malignancy. It is therefore useful for screening suspicious oral lesions; if dysplastic cells or molecular alterations are identified, patients should be referred for tissue biopsy.

Figure 9 shows a close-up view of the tip of a cytobrush. A toothbrush is a reliable and cheap alternative (Figure 10). Figure 10: Toothbrush is a reliable and cheap alternative for a cytobrush1

Percutaneous core biopsy allows one to harvest a solid core of tumour for histological examination in an ambulatory setting. It is generally done with a Trucut biopsy system. Unlike FNAC, Trucut biopsy can seed tumour cells; therefore, avoid using it for salivary gland tumours, melanomas etc. unless the tumour is considered to be inoperable.

An outer cannula unsheathes a sharppointed needle that can be retracted and advanced into and out of the cannula. The needle has a notch which traps a core of tissue which has been sliced off the tumour by the sharp end of the outer cannula (Figures 11a-d). It requires a two-handed technique, although automated and semiautomated systems are also available. Figure 12: Core of tissue in the notch of the Trucut needle

Mucosal tumours of the upper aerodigestive tract are typically biopsied under local anaesthesia in the office or outpatient clinic. Topical anaesthesia is applied to the mucosa following which local anaesthesia (1% or 2% lidocaine with 1:100,000 epinephrine) is injected into the surrounding submucosa or a nerve block is done e.g. of the lingual nerve (http://emedicine. medscape.com/article/82850-overview).

Once well anaesthetised, a punch biopsy is taken with Blakesley forceps, taking care not to crush the tissue. A through-cutting Blakesley forceps is preferred as it does not tear tissue and causes less crush artifact (Figure 13). Bleeding is generally minor and stops spontaneously or can be arrested with chemical cautery using a silver nitrate stick (Figure 14). Punch biopsy is used for pigmented skin lesions, neoplasms, inflammatory and chronic disorders of skin. It is done under local anaesthesia with a circular blade attached to a handle that is rotated as it is advanced to produce a 3-4mm cylindrical full thickness core of skin (Figure 15). Figure 18: Rotate punch through skin, and divide the specimen with fine scissors below the dermis while holding it with a needle

Open surgical biopsy is indicated when FNAC and Trucut biopsy are inconclusive or are suggestive of lymphoma.

Anaesthesia: Biopsy is done under local or general anaesthesia. Because taking a biopsy of a deep-seated lymph node is often more difficult than expected, especially for a surgeon not well versed in the detailed surgical anatomy of the neck, one should have a low threshold for doing such biopsies under general anaesthesia.

Haemostasis: At the conclusion of the surgery, ask the anaesthetist to do a Valsalva procedure to identify venous bleeders. Have a low threshold for leaving a drain in place to prevent a haematoma.

Lymph node biopsy: Lymph nodes should ideally be completely excised rather than incised to avoid contaminating the neck with cancer cells of an unsuspected cervical metastasis.

Submandibular triangle (Level 1) biopsy: Masses of the submandibular gland are removed by resecting the whole gland. Removing lymph nodes in the vicinity of the mandibular ramus puts the marginal mandibular nerve at risk of injury; it is safest and cosmetically best to place the incision in the vicinity of the hyoid bone; to raise a superiorly based flap over Level 1 as for a neck dissection or as for excision of the submandibular salivary gland (See Submandibular gland excision); and to identify the marginal mandibular nerve where it crosses the facial vessels deep to platysma before excising the node (Figure 19).

Posterior triangle (Level V) lymph node biopsy: The spinal accessory nerve is very superficial in the posterior triangle, often just deep to skin in a thin patient. Injury to the nerve is a common cause of litigation. It exits the sternocleidomastoid muscle to enter the posterior triangle about 1cm behind Erb’s point which is at the junction of the upper and middle thirds of the muscle where the cervical plexus branches exit (Figure 20). Avoid muscle relaxants so that mechanical or electrical stimulation can be used to help identify the nerve Parotid biopsy: The principal concern is injury to the facial nerve. Other than in the hands of an experienced parotid surgeon, a mass should not simply be excised, but removed by formal partial parotidectomy with identification of the facial nerve (See Parotidectomy).

Tumours in the nasal cavity and nasopharynx can generally be biopsied in the office/outpatients department under local anaesthesia with the exception of vascular tumours such as angiofibromas. Angiofibromas should be suspected in younger males and should not be biopsied. Transoral biopsy technique of the nasopharynx under general anaesthesia