Ranula refers to a collection of extraglandular and extraductal saliva in the floor of the mouth originating from the sublingual salivary gland. It may rarely originate from injury to the submandibular gland (SMG) duct. It is a pseudocyst, as it does not have an epithelial lining.

It classically presents as a soft submucosal swelling in the floor of the mouth (Figure 1). The term ranula originates from the Latin word for frog (rana) as the cyst is said to look like the underbelly of a frog. Figure 1: Ranula in floor of mouth

A plunging ranula extends into the submandibular triangle of the neck through a defect in the mylohyoid muscle, or less commonly, by passing behind the posterior edge of the muscle (Figure 2). Figure 2: Plunging ranula: oral (a) and cervical (b) components

A ranula may also track posteriorly along tissue planes into the parapharyngeal space (Figure 3). The simplest way to clinch the diagnosis is by examining a needle aspirate of the typically thick, straw colored saliva (Figure 4). The paired sublingual salivary glands are located beneath the mucosa of the anterior floor of mouth, anterior to the submandibular ducts and above the mylohyoid and geniohyoid muscles (Figures 5, 6, 7). The glands drain via 8-20 excretory ducts of Rivinus into the SMG duct and also directly into the mouth on an elevated crest of mucous membrane called the plica fimbriata which is formed by the gland and is located to either side of the frenulum of the tongue (Figures 6 & 7). The lingual nerve crosses deep to the submandibular duct in the lateral floor of mouth. In the anterior floor of mouth it is located posterior to the duct (Figures 5 & 6).

The submandibular duct is located immediately deep to the mucosa of the anterior and lateral floor of mouth and opens into the oral cavity to either side of the frenulum (Figures 5 & 6).

Ranine veins are visible on the ventral surface of the tongue and accompany the hypoglossal nerve (Figure 8). 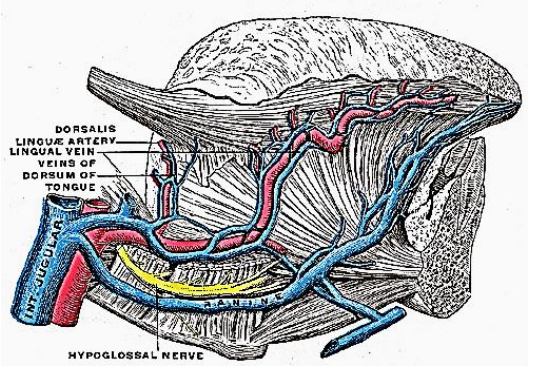 The detailed surgical anatomy of the SMG and submandibular triangle are dealt with in detail in the chapter on submandibular gland excision.

The following description applies to excision of a simple ranula, the sublingual salivary gland, and a plunging ranula.

A broad-spectrum antibiotic is administered for 24hours. With excision of a plunging ranula the anaesthetist should avoid muscle paralysis as it is useful to monitor the movement of the lower lip should the marginal mandibular nerve be surgically irritated

The patient is placed in a supine position with neck extended. The skin of the anterior neck and lower face is sterilised. Draping is done in such a way that the mouth and upper neck are exposed. A selfretaining retractor is used to open the mouth. A silk traction suture is passed through the tip of the tongue to better expose the anterior floor of the mouth.

Excision of a simple ranula (Figure 1)

The mucosa is incised over the ranula taking care not to enter the sac. A submucosal dissection plane is established over the wall of the ranula. Using sharp and blunt dissection, the cyst is excised, taking care not to injure the submandibular duct or the lingual nerve. Should the submandibular duct be injured, then it is simply translocated to the lateral floor of mouth by mobilising the duct, and passing it through a stab incision in the mucosa of the lateral floor of mouth. It is secured to the oral mucosa with a suture passed through the side of the duct (Figure 9). Figure 9: Submandibular duct transposed to right lateral floor of mouth, and sutured to mucosa with a vicryl suture A plunging ranula resolve by simply excising the sublingual salivary gland. Yet some surgeons prefer also to excise the ranula.

Readers are referred to the chapter on submandibular gland excision for the surgical anatomy, as much of the dissecttion is similar. A horizontal incision, placed in a skin crease and at least 3cms below the mandible or at the level of the hyoid bone and extending anteriorly from the anterior border of the sternocleidomastoid muscle, is made through skin, subcutaneous tissue and platysma. The common facial and anterior facial veins are identified posteriorly and divided and ligated if required for access. The ranula is identified in the anterior part of the submandibular triangle (Figure 12). Figure 13: Muscles encountered with SMG excision, and area of dehiscence in mylohyoid through which plunging ranula typically passes into the neck

The surgeon may have to mobilise and resect the SMG for better access (Figure 14). The ranula is mobilised with sharp and blunt dissection from the surrounding muscles and the SMG posteriorly. It is traced to where it generally passes through a dehiscence in the mylohyoid muscle, or less commonly behind the mylohyoid, into the floor of the mouth. The surgeon then completes the resection transorally, including resection of the sublingual salivary gland. Should the SMG have been preserved, then the status of the submandibular duct is checked to determine whether it needs to be translocated. The mucosal defect in the floor of mouth is then closed with absorbable sutures, and the neck is closed in layers over a suction drain. The author does not marsupialise or excise ranulae, but simply excises the sublingual salivary gland. With plunging ranula he also aspirates the sac at surgery to hasten its resolution and to avoid it becoming infected (Patel MR, Deal AM, Shockley WW. Oral and plunging ranulas: What is the most effective treatment? Laryngoscope. 2009;119(8):1501–9)