The parapharyngeal space (PPS) extends from the skull base above, to the hyoid bone below, and contains fat, the carotid artery, internal jugular vein, and the lower cranial nerves and sympathetic nerve. Surgical resection of tumors of the PPS requires a good understanding of the anatomy, likely pathology (if not known), and surgical approaches.

The PPS extends as an inverted pyramid from the base of the skull superiorly, to the hyoid bone inferiorly. Figure 1 illustrates an axial view of the prestyloid (yellow) and poststyloid components of the PPS, separated by the styloid process, tensor veli palatini muscle and fascia stretching between (brown). The poststyloid space contains the internal carotid artery and the internal jugular vein, as well as the lower cranial nerves IX -XII, and the sympathetic trunk. It is confined medially by the pharyngobasilar fascia above, and the superior constrictor muscle of the pharynx.

Patients typically present with a mass in the lateral oropharynx, displacing the tonsil medially (Figure 2). The prestyloid PPS is bordered anterolaterally by the medial pterygoid muscle, and posterolaterally by the deep lobe of the parotid gland (Figures 1, 3). It extends from the hyoid bone inferiorly, to the skull base superiorly and contains mainly fat 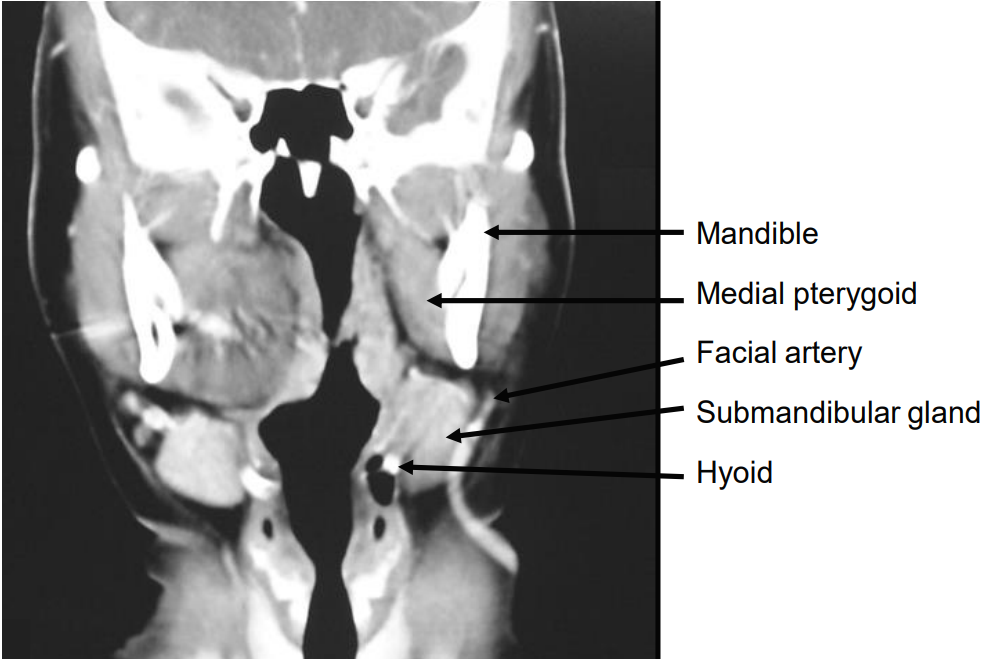 Figure 4: Direction of displacement of fat as seen on CT or MRI with prestyloid PPS mass (light blue) Examples of masses commonly encountered in the prestyloid PPS include pleomorphic adenoma (Figures 3, 5), medial extension of a deep lobe parotid tumor (Figure 6) and a ranula that has tracked into the PPS (Figure 7).

Patients typically present with a mass extending into the upper lateral neck in the lateral oro- or nasopharynx, or with dysfunction of cranial nerves IX-XII, or Horner’s syndrome. The poststyloid PPS is confined medially by the pharyngobasilar fascia above, and the superior constrictor muscle of the pharynx. It contains the internal carotid artery and the internal jugular vein, as well as the lower cranial nerves IX -XII, and the sympathetic trunk. Unlike prestyloid masses, poststyloid tumors typically displace the PPS fat anterolaterally (Figures 8, 9). Figure 8: Direction of displacement of fat as seen on CT or MRI with poststyloid mass (light blue) The most commonly encountered masses include carotid body tumors, or other paragangliomas e.g. of the vagus nerve and sympathetic trunk, and schwannomas (Figures 9, 10). One should determine the following before embarking on surgery:

Figure 11 presents a schematic summary of the surgical approaches to the PPS. Masses in the prestyloid space are mostly benign, well defined, surrounded by fat, and unlike tumors of the poststyloid space, are generally not tethered to structures such as major nerves and vessels. They can therefore generally be removed by careful blunt dissection along the tumor capsule, avoiding tumor rupture (especially with pleomorphic adenomas that may seed). The tumors are situated anywhere between the hyoid bone and the skull base, but generally do not extend above the level of the hard palate or pterygoid plates and are situated on the medial aspect of the medial pterygoid muscle. They are readily accessed via a transcervical submandibular approach. Only rarely a transoral approach + mandibulotomy required. A large tumor arising from the deep lobe of the parotid may require a combined transcervical and transparotid approach.

A horizontal skin crease incision is made at the level of the hyoid bone. The submandibular salivary gland (SSG) and digastric muscle are identified. The anterior facial vein is ligated and divided. The capsule of the SSG is incised. The SSG is mobilized in a subcapsular plane to protect the marginal mandibular nerve. The facial artery is identified posteroinferior to the gland where it emerges from behind the posterior belly of the digastric muscle (Figure 12). 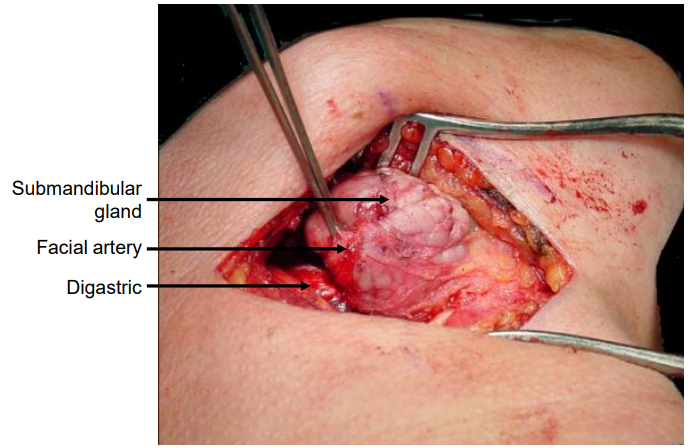 The facial artery is then ligated and divided above the posterior belly of digastric. The submandibular gland is mobilized with gentle finger dissection in a posterior to anterior direction leaving the thin fascial layer over the ranine veins and the hypoglossal nerve intact (Figure 12). Additional mobility of the SSG may be achieved (if required) by dividing the facial artery and anterior facial vein above the SSG.

By retracting the posterior belly of digastric posteriorly, the mandible superiorly, and the submandibular gland anteriorly the surgeon can pass a finger /instrument directly into the prestyloid PPS (Figures 13, 14, 15). This approach is essentially the same as an extended tonsillectomy and may include a midline or paramedian mandibulotomy for additional access (Figures 11, 16). A disadvantage is that the neck is not opened, and the vessels not exposed in the event of injury to the major vessels requiring proximal vascular control. Even large prestyloid tumors e.g. arising from the deep lobe of the parotid gland (Figure 17) may be resected via a combination of transparotid (see description below) and transcervical approaches. The principal challenges relating to resecting poststyloid masses are avoiding injury to the internal carotid artery, internal jugular vein and the lower cranial and sympathetic nerves. Access is restricted by the vertical ramus of the mandible, the parotid gland, the facial nerve and the styloid process with its muscular and ligamentous attachments.

Masses in the poststyloid space are mostly benign but unlike tumors of the prestyloid space, are generally tethered to/arise from major nerves and vessels. Resection requires good exposure of the mass and the major vessels and nerves via transcervical and/or transparotid approaches. Rarely a mandibulotomy of the vertical ramus of the mandible is required for additional exposure. Patients should be cautioned about the sequelae of vascular and lower cranial nerve injury, as well sympathetic trunk injury causing Horner’s and “1st Bite” syndromes. Preoperative embolisation of paragangliomas reduces intraoperative bleeding.

The transcervical approach is suitable for tumors extending up to about the level of the styloid process, such as smaller carotid body and glomus vagale tumors, as well as lower lying schwannomas. The upper neck is exposed via a transverse skin crease incision, the X, XI, and XII nerves are identified, as are the carotid bifurcation and the internal jugular vein. The mass is then removed using sharp dissection. The posterior belly of digastric is either retracted superiorly or divided to provide access deep to the parotid gland (Figure 18). The transparotid approach is required for masses situated closer to the skull base. The superficial lobe of the parotid gland is elevated off the facial nerve, the nerve is freed from the deep lobe, and the deep parotid lobe is resected. This exposes the styloid process. Immediately medial to the styloid are the contents of the poststyloid PPS. Access can be further improved by excising the styloid process with a bone nibbler and retracting the mandible anteriorly (taking care to avoid excessive tension on the facial nerve), and inferiorly by dividing the posterior belly of the digastric. Figure 22: Additional access to poststyloid PPS in Figures 15 & 16 by transection of digastric muscle

Kundiona I, Fagan JJ. Consequences and complications of surgery for tumors of the pre- versus poststyloid parapharyngeal spaces in 41 patients (our experience). Clin Otolaryngol. 2017 Aug;42(4):886-8