Tumors of the hard palate and superior alveolus may be resected by inferior maxillectomy (Figure 1). A Le Fort 1 osteotomy may also be used as an approach to e.g. angiofibromas and the nasopharynx.

A sound understanding of the 3-dimensional anatomy of the maxilla and the surrounding structures is essential to do the operation safely. Hence the detailed description of the relevant surgical anatomy that follows.

Figure 2: Lateral view of maxilla with windows cut in lateral and medial walls of maxillary sinus

Figure 3: Bony anatomy of the lateral wall of the nose

Critical surgical landmarks to note include:

Figure 2 illustrates the bony anatomy of the lateral wall of the nose. The inferior turbinate (concha) may be resected with inferior maxillectomy, but the middle turbinate is preserved.

Figure 5 demonstrates the coronal anatomy at the anterior limit of a maxillectomy. Specifically note the lacrimal sac in the lacrimal fossa (Figure 4, 5) which may be transected at surgery, and the relative heights of the floors of the antrum and the nasal cavity.

Figure 6: Anatomy in the coronal plane through the anterior ethmoids midway along a maxillectomy

Figure 6 demonstrates the coronal anatomy midway back along a maxillectomy. Specifically note the infraorbital nerve in the orbital floor, the thin lamina papyracea and the relative heights of the floors of the antrum and the nasal cavity.

Figure 7: Note the position of the anterior ethmoidal artery where it passes through its foramen which is located in the frontoethmoidal suture line

Figures 7 & 8 demonstrate the value of using the anterior and posterior ethmoidal arteries and frontoethmoidal suture line (Figure 4) to determine the level of the floor of the anterior cranial fossa when opening the lamina papyracea from the orbital side during medial or total maxillectomy.

Figure 9 demonstrates the coronal anatomy immediately posterior to the maxillary sinus, which is in the plane through which an inferior or total maxillectomy is done, and in which the internal maxillary artery and its branches as well as the sphenopalatine ganglion and its branches are encountered within the pterygopalatine fossa. The pterygopalatine fossa communicates laterally with the infratemporal fossa via the pterygomaxillary fissure, and medially with the nasal cavity via the sphenopalatine foramen. Figures 10 & 11 show axial views of the anatomy of the maxillary sinus. The posterior resection lines of total and inferior maxillectomies pass through the pterygopalatine fossa and pterygomaxillary fissure and the anterior aspect of the pterygoid plates.

The bony anatomy of the hard palate is illustrated in Figure 12.

An understanding of the blood supply of the maxilla permits the surgeon to anticipate when and where to encounter bleeding, and to plan the sequence of the surgery to reserve the bloodier parts of the surgery until last to minimize blood loss and to avoid blood obscuring the surgical field. 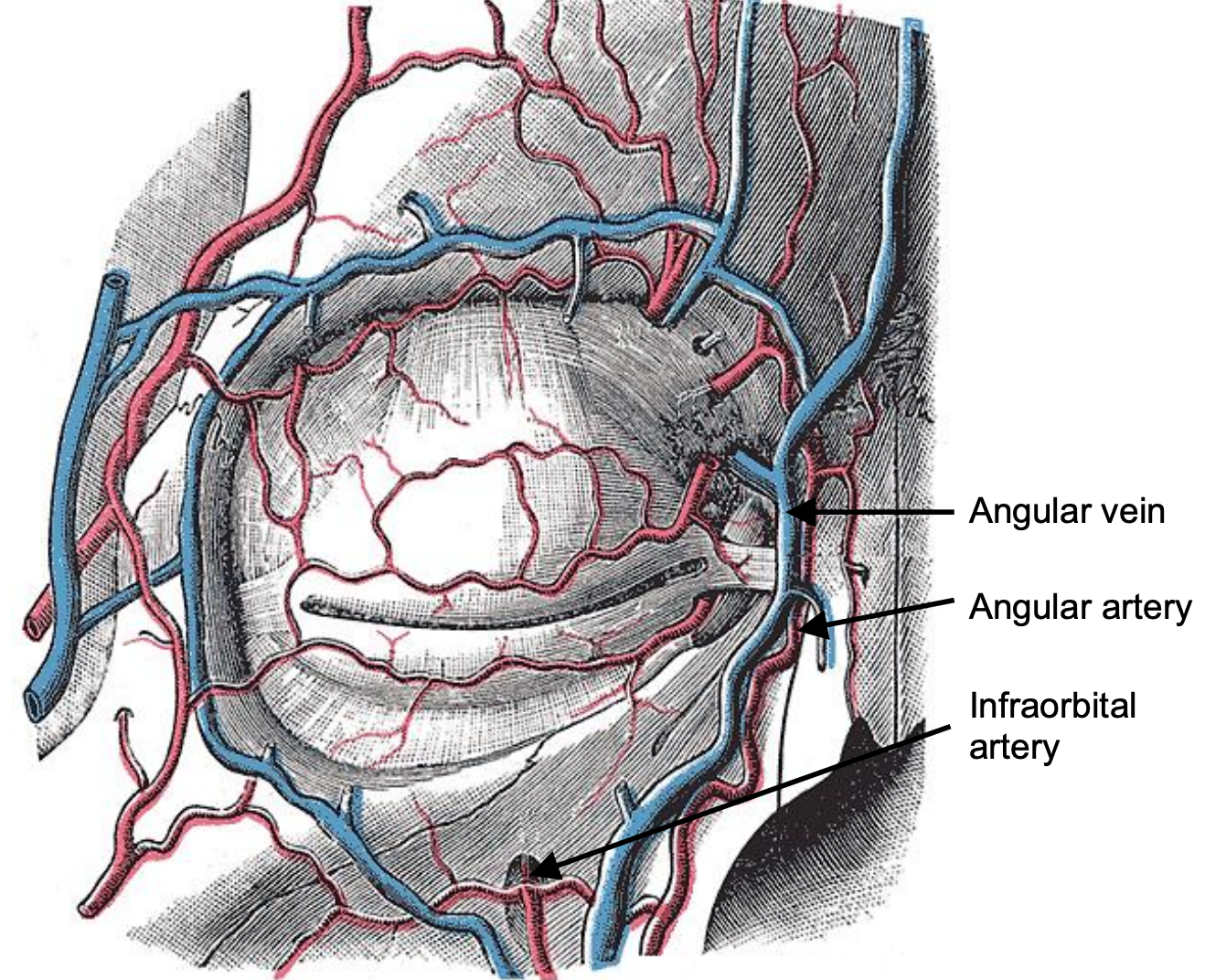 Figure 13: Vasculature around the orbit

The only significant vein encountered during maxillectomy is the angular vein (Figure 13) at the medial canthus.

The arterial blood supply to the maxilla and paranasal sinuses originates from both the external and internal carotid artery systems. During inferior maxillectomy one can expect to encounter some bleeding from the descending palatine artery, which originates from the maxillary artery in the pterygopalatine fossa, passes inferiorly through the pterygopalatine canal, and emerges from the greater palatine foramen as the greater palatine artery to supply the hard palate.

The arterial supply relevant to inferior maxillectomy is as follows:

Figure 14: Facial artery and origin of internal maxillary artery, both branches of the external carotid artery

Figure 15: Branches of internal maxillary artery; blue shaded area is the 2nd part of artery before it enters the pterygopalatine fossa

Branches of the internal maxillary artery of surgical significance include:

The maxillary division of V (V2) enters the pterygopalatine fossa via the foramen rotundum. The only branch of surgical significance is the infraorbital nerve. It runs in the floor of the orbit/roof of the antrum to exit from the infraorbital foramen (Figure 16).

Figure 19: Polymorphous low grade adenocarcinoma of palate suited to unilateral inferior maxillectomy with resection crossing midline and including the base of the nasal septum

The following description refers to a tumor that requires resection of half the hard palate.

Figure 21 illustrates the extent of the bone resection following a unilateral inferior maxillectomy with preservation of the inferior turbinate.

Preoperative consent includes discussing facial incisions, potential injury to the infraorbital nerve, reconstructive options and the loss of dentition and ability to wear dentures or to have dental implants.

The operation is done under general anesthesia, with orotracheal intubation, or nasotracheal intubation if only half the palate is to be removed. A temporary tracheostomy is done to ensure an adequate airway in case soft tissue swelling or bleeding occurs. Perioperative broad-spectrum antibiotics are administered for 24 hours.

The operation may be considered in 3 stages: soft tissue dissection/bone exposure; bone resection; and closure/reconstruction.

It is important to complete the soft tissue dissection and bone exposure before doing any bone work to avoid excessive blood loss.

Figure 25: Lateral view of osteotomies, including through pterygomaxillary fissure

Figure 26: Osteotomies including osteotomy between maxillary tuberosity and pterygoid plates and of palate

Figures 30 a, b & c show a limited inferior maxillectomy for a minor salivary gland tumor which was reconstructed with a combination of a local rotation flap and a buccinator flap.

Figure 31a: Malignant melanoma of superior alveolus and hard palate

Figure 32: (L) inferior maxillectomy with (R) total maxillectomy for sarcoma crossing the midline of the palate

The objectives are to restore palatal integrity to separate the oral cavity from the nose and antrum, to maintain midfacial projection, and to facilitate dental restoration. This may be achieved in the following ways: 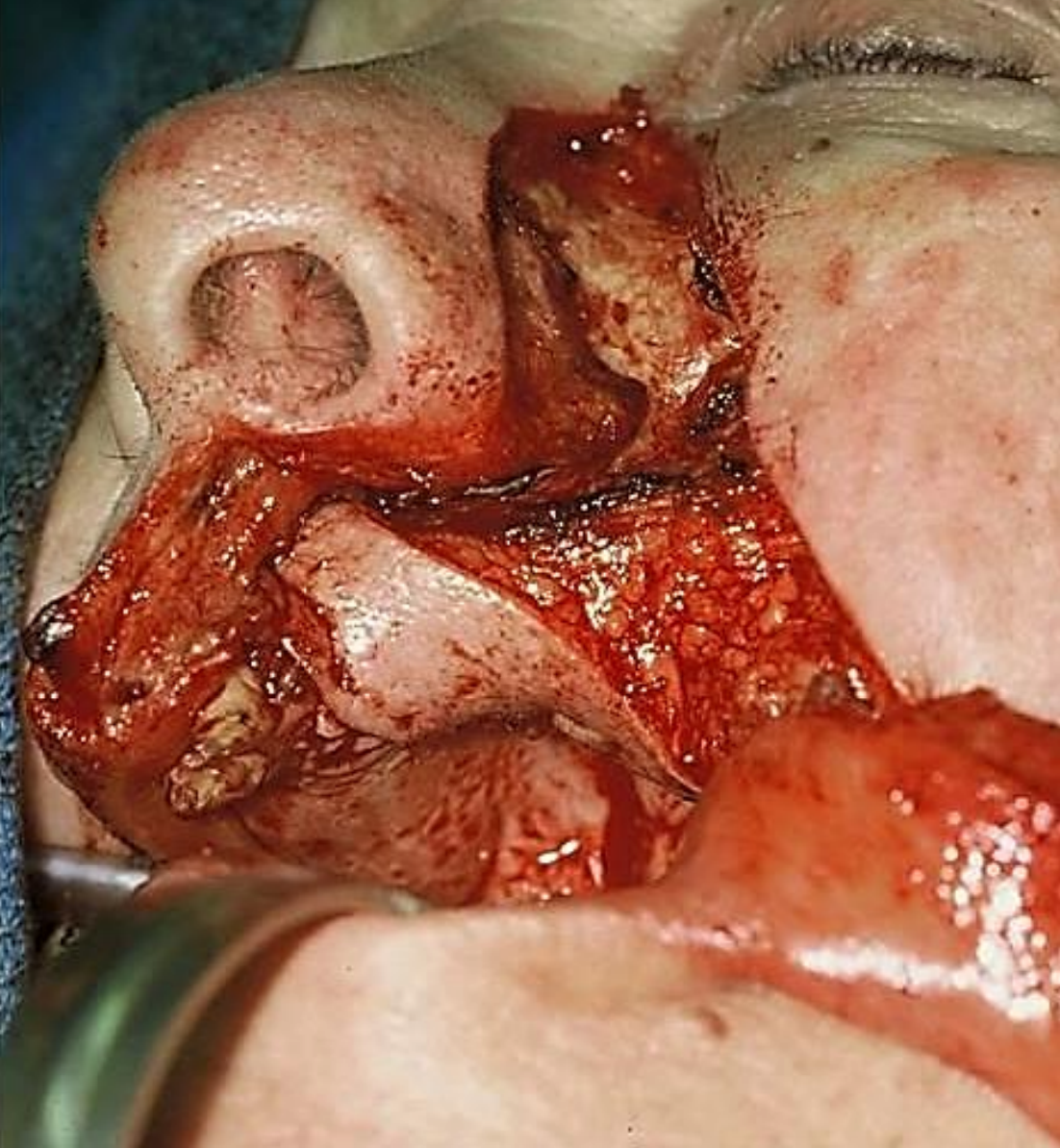 Figure 33: Flap turned in to reconstruct the defect

Figure 34: Nasolabial flap inset into the defect and donor site and lip-split closed