Ion channels are membrane proteins that allow ions to travel into or out of a cell.

Voltage-gated sodium ion channels contribute to the “spike” of a neuron’s action potential. 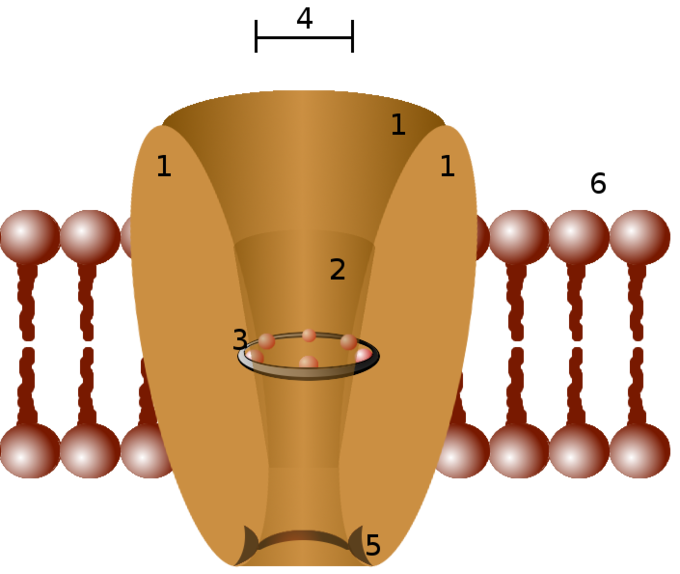 Ion channel: A schematic representation of an ion channel. The cell membrane is depicted by #6 and the ion channel pore by #3.

Plasma membrane is studded with a variety of membrane proteins that act as ion channels. Each channel only allows certain types of ions to pass across the membrane. Most channels are specific (selective) for one ion. The channel pore is typically so small that ions must pass through it in single file.

A channel may have several different states (corresponding to different conformations of the protein), but each such state is either open or closed. In general, closed states correspond either to a contraction of the pore—making it impassable to the ion—or to a separate part of the protein, stoppering the pore. When a channel is open, ions permeate through the channel pore down the transmembrane concentration gradient for that particular ion. Rate of ionic flow through the channel is determined by the maximum channel conductance and electrochemical driving force for that ion.

Leakage channels are the simplest type of ion channel, in that their permeability is more or less constant. The types of leakage channels with the greatest significance in neurons are potassium and chloride channels. Although they are the simplest in theory, most conduct better in one direction than the other (they are rectifiers) and some are capable of being shut off by ligands even though they do not require ligands in order to operate.

Ligand-gated ion channels are channels whose permeability is greatly increased when some type of chemical ligand binds to the protein structure. A large subset function as neurotransmitter receptors—they occur at postsynaptic sites, and the chemical ligand that gates them is released by the presynaptic axon terminal. Ligand-gated channels can be activated by ligands that appear in the extracellular area or by interactions on the intracellular side. 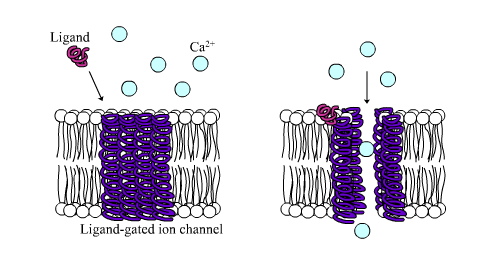 A Ligand-gated Ion Channel: Ligand-gated ion channels (LGICs) are one type of ionotropic receptor or channel-linked receptor. They are a group of transmembrane ion channels that open or close in response to the binding of a chemical messenger (ligand), such as a neurotransmitter.

Voltage-gated ion channels, also known as voltage-dependent ion channels, are channels whose permeability is influenced by the membrane potential. They form another very large group, with each member having a particular ion selectivity and a particular voltage dependence. Many are also time-dependent—in other words, they do not respond immediately to a voltage change, but only after a delay. Voltage-gated channels are essential for the generation and propagation of action potentials.

Ion pump example: Example of primary active transport, where energy from hydrolysis of ATP is directly coupled to the movement of a specific substance across a membrane independent of any other species.