The membrane potential allows a cell to function as a battery, providing electrical power to activities within the cell and between cells.

In neurons, a sufficiently large depolarization can evoke an action potential in which the membrane potential changes rapidly.

Membrane potential (also transmembrane potential or membrane voltage) is the difference in electrical potential between the interior and the exterior of a biological cell. All animal cells are surrounded by a plasma membrane composed of a lipid bilayer embedded with various protein types. The membrane serves as both an insulator and a semi-permeable diffusion barrier to the movement of ions. Ions are moved across the cell membrane either through active (using energy) or passive (not using energy) transport.

Virtually all eukaryotic cells (including cells from animals, plants, and fungi) maintain a nonzero transmembrane potential, usually with a negative voltage in the cell interior compared to the cell exterior.

The Membrane Potential as a Signal

In non-excitable cells, and in excitable cells in their baseline states, the membrane potential is held at a relatively stable value called the resting potential. For neurons, typical values of the resting potential range from –70 to –80 millivolts; that is, the interior of a cell has a negative baseline voltage of a bit less than one tenth of a volt. The opening and closing of ion channels can induce a departure from the resting potential. This is called a depolarization if the interior voltage becomes more positive (say from –70 mV to –60 mV), or a hyperpolarization if the interior voltage becomes more negative (say from –70 mV to –80 mV). The changes in membrane potential can be small or larger (graded potentials) depending on how many ion channels are activated and what type they are. In excitable cells, a sufficiently large depolarization can evoke an action potential in which the membrane potential changes rapidly and significantly for a short time (on the order of 1 to 100 milliseconds), often reversing its polarity. Action potentials are generated by the activation of certain voltage-gated ion channels. 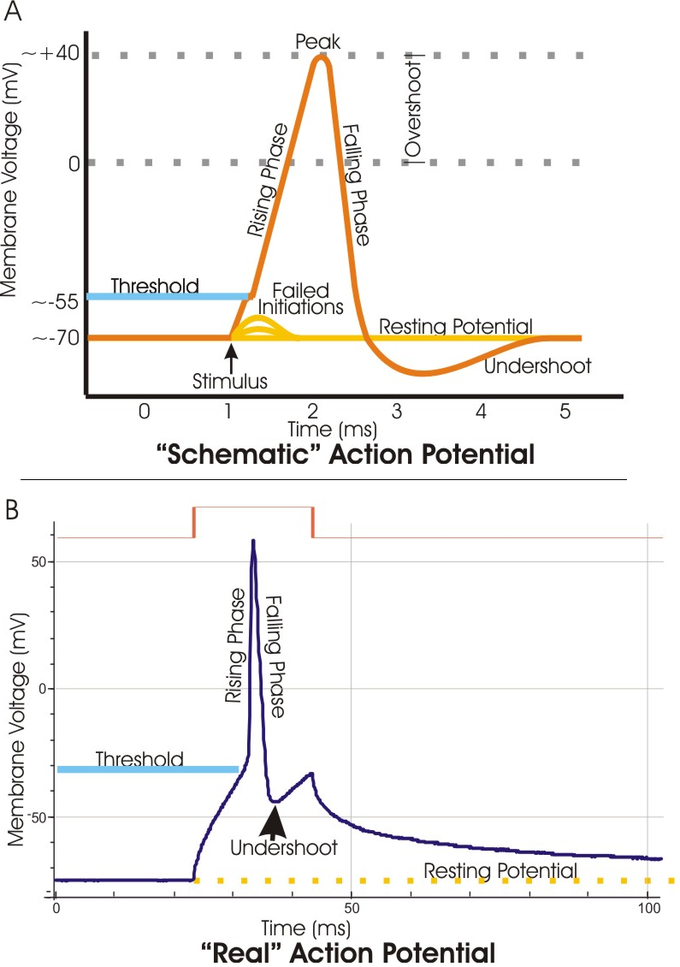