The midbrain plays a major role in both wakefulness and regulation of homeostasis.

The midbrain or mesencephalon (from the Greek mesos, middle, and enkephalos, brain ) is a portion of the central nervous system (CNS) associated with vision, hearing, motor control, sleep and wake cycles, arousal (alertness), and temperature regulation. Anatomically, it comprises the tectum (or corpora quadrigemina), tegmentum, ventricular mesocoelia (or “iter”), and the cerebral peduncles, as well as several nuclei and fasciculi. Caudally (posteriorly) the mesencephalon adjoins the pons (metencephalon), and rostrally it adjoins the diencephalon (eg., thalamus, hypothalamus). The midbrain is located below the cerebral cortex and above the hindbrain placing it near the center of the brain. 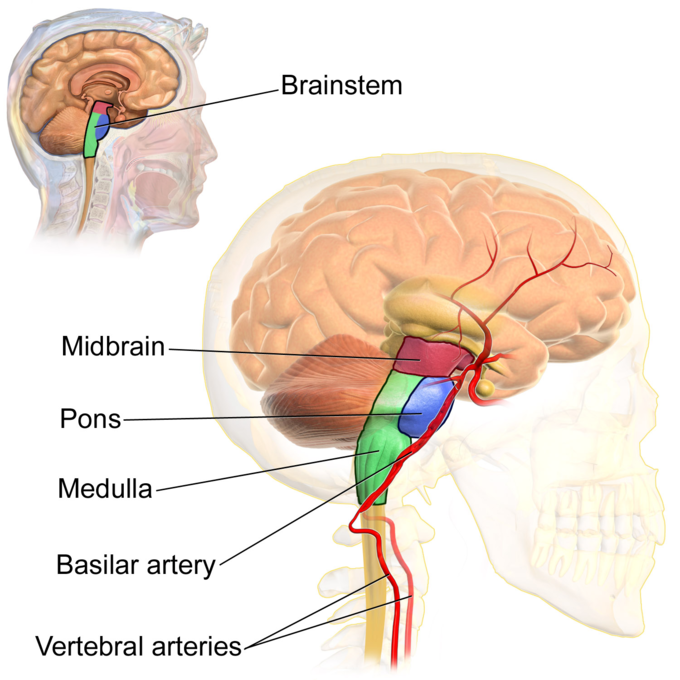 Brainstem Anatomy: Brainstem anatomy showing the location of the midbrain in relation to the midbrain, pons, medulla, basilar artery, and vertebral arteries.

The tegmentum is involved in many unconscious homeostatic and reflexive pathways, and is the motor center that relays inhibitory signals to the thalamus and basal nuclei to prevent unwanted body movement. It extends from the substantia nigra to the cerebral aqueduct (also called the ventricular mesocoeli). The nuclei of cranial nerves III and IV are located in the tegmentum portion of the midbrain.

The substantia nigra is closely associated with motor system pathways of the basal ganglia. The human mesencephalon is archipallian in origin, sharing its general architecture with the most ancient of vertebrates. Dopamine produced in the substantia nigra plays a role in motivation and habituation of species from humans to the most elementary animals such as insects. The midbrain is the smallest region in the brain and helps to relay information for vision and hearing.

During embryonic development, the midbrain arises from the second vesicle, also known as the mesencephalon, of the neural tube. Unlike the other two vesicles (the prosencephalon and rhombencephalon), the mesencephalon remains undivided for the remainder of neural development. It does not split into other brain areas while the prosencephalon, for example, divides into the telencephalon and the diencephalon. Throughout embryonic development, the cells within the midbrain continually multiply and compress the still-forming aqueduct of sylvius or cerebral aqueduct. Partial or total obstruction of the cerebral aqueduct during development can lead to congenital hydrocephalus.