The diencephalon (“interbrain”) is the region of the vertebrate neural tube that gives rise to posterior forebrain structures. In development, the forebrain develops from the prosencephalon, the most anterior vesicle of the neural tube that later forms both the diencephalon and the telencephalon. In adults, the diencephalon appears at the upper end of the brain stem, situated between the cerebrum and the brain stem. It is made up of four distinct components: the thalamus, the subthalamus, the hypothalamus, and the epithalamus.

Diencephalon: Three-dimensional view of the diencephalon

Other structures that are part of the diencephalon are: 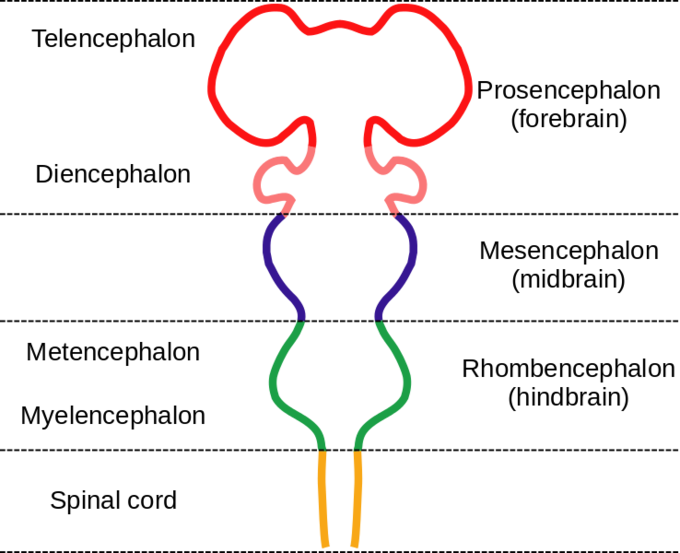 The thalamus is a kind of switchboard of information, believed to act as a relay between a variety of subcortical areas and the cerebral cortex. In particular, every sensory system (with the exception of the olfactory system) includes a thalamic nucleus that receives sensory signals and sends them to the associated primary cortical area. The thalamus also plays an important role in regulating states of sleep and wakefulness. Thalamic nuclei have strong reciprocal connections with the cerebral cortex, forming thalamo-cortico-thalamic circuits that are believed to be involved with consciousness. The thalamus plays a major role in regulating arousal, awareness level, and activity. Damage to the thalamus can lead to permanent coma.

The subthalamus connects to the globus pallidus, a basal nucleus of the telencephalon. It receives afferent connections from the substantia nigra and striatum and regulates skeletal muscle movements.

The hypothalamus performs numerous vital functions (e.g., regulation of certain metabolic processes), most of which relate directly or indirectly to the regulation of visceral activities by way of other brain regions and the autonomic nervous system. It synthesizes and secretes certain neurohormones, often called hypothalamic-releasing hormones, and these in turn stimulate or inhibit the secretion of pituitary hormones. The hypothalamus controls body temperature, hunger, thirst, fatigue, sleep, and circadian cycles.

The epithalamus functions as a connection between the limbic system and other parts of the brain. Some functions of its components include the secretion of melatonin by the pineal gland (involved in circadian rhythms) and regulation of motor pathways and emotions.