White matter is composed of myelinated axons and glia and connects distinct areas of the cortex.

Describe the white matter of the cerebrum 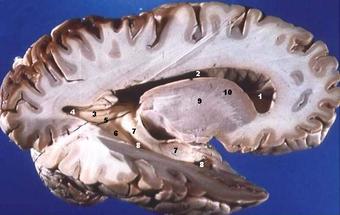 White matter is one of the two components of the central nervous system (CNS). It consists mostly of glial cells and myelinated axons and forms the bulk of the deep parts of the cerebrum and the superficial parts of the spinal cord. In a freshly cut brain, the tissue of white matter appears pinkish white to the naked eye because myelin is composed largely of lipid tissue containing capillaries. The axons of white matter transmit signals from various grey matter areas (the locations of nerve cell bodies) of the cerebrum to each other and carry nerve impulses between neurons. While grey matter is primarily associated with processing and cognition, white matter modulates the distribution of action potentials, acting as a relay and coordinating communication between different brain regions.

There are three different kinds of tracts (bundles of axons) that connect one part of the brain to another within the white matter:

The corpus callosum (Latin: “tough body”), also known as the colossal commissure, is a wide, flat bundle of neural fibers beneath the cortex in the eutherian brain at the longitudinal fissure. It connects the left and right cerebral hemispheres and facilitates interhemispheric communication. It is the largest white matter structure in the brain, consisting of 200 to 250 million contralateral axonal projections.

Corpus Callosum: Location of the corpus callosum in the cerebrum.

Agenesis of the corpus callosum (ACC) is a rare congenital disorder in which the corpus callosum is partially or completely absent. It is usually diagnosed within the first two years of life and may manifest as a severe syndrome in infancy or childhood, as a milder condition in young adults, or as an asymptomatic incidental finding. Initial symptoms of ACC usually include seizures that may be followed by feeding problems and delays in holding the head erect, sitting, standing, and walking. Hydrocephaly may also occur.

Other possible symptoms include impairments in mental and physical development, hand-eye coordination, and visual and auditory memory. In mild cases, symptoms such as seizures, repetitive speech, or headaches may not appear for years.