The somatosensory pathway is composed of three neurons located in the dorsal root ganglion, the spinal cord, and the thalamus.

A somatosensory pathway will typically have three long neurons: primary, secondary, and tertiary. The first always has its cell body in the dorsal root ganglion of the spinal nerve. 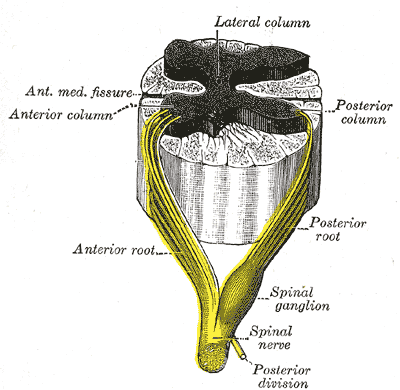 In the case of touch and certain types of pain, the third neuron has its cell body in the ventral posterior nucleus of the thalamus and ends in the postcentral gyrus of the parietal lobe.

In the periphery, the somatosensory system detects various stimuli by sensory receptors, such as by mechanoreceptors for tactile sensation and nociceptors for pain sensation. The sensory information (touch, pain, temperature, etc.,) is then conveyed to the central nervous system by afferent neurons, of which there are a number of different types with varying size, structure, and properties.

In the spinal cord, the somatosensory system includes ascending pathways from the body to the brain. One major target within the brain is the postcentral gyrus in the cerebral cortex. This is the target for neurons of the dorsal column–medial lemniscal pathway and the ventral spinothalamic pathway.

Note that many ascending somatosensory pathways include synapses in either the thalamus or the reticular formation before they reach the cortex. Other ascending pathways, particularly those involved with control of posture, are projected to the cerebellum, including the ventral and dorsal spinocerebellar tracts.

Another important target for afferent somatosensory neurons that enter the spinal cord are those neurons involved with local segmental reflexes.

Spinal nerve: The formation of the spinal nerve from the dorsal and ventral roots.

The primary somatosensory area in the human cortex is located in the postcentral gyrus of the parietal lobe. This is the main sensory receptive area for the sense of touch.

Like other sensory areas, there is a map of sensory space called a homunculus at this location. Areas of this part of the human brain map to certain areas of the body, dependent on the amount or importance of somatosensory input from that area.

For example, there is a large area of cortex devoted to sensation in the hands, while the back has a much smaller area. Somatosensory information involved with proprioception and posture also target an entirely different part of the brain, the cerebellum.

This is a pictorial representation of the anatomical divisions of the primary motor cortex and the primary somatosensory cortex; namely, the portion of the human brain directly responsible for the movement and exchange of sensory and motor information of the body. 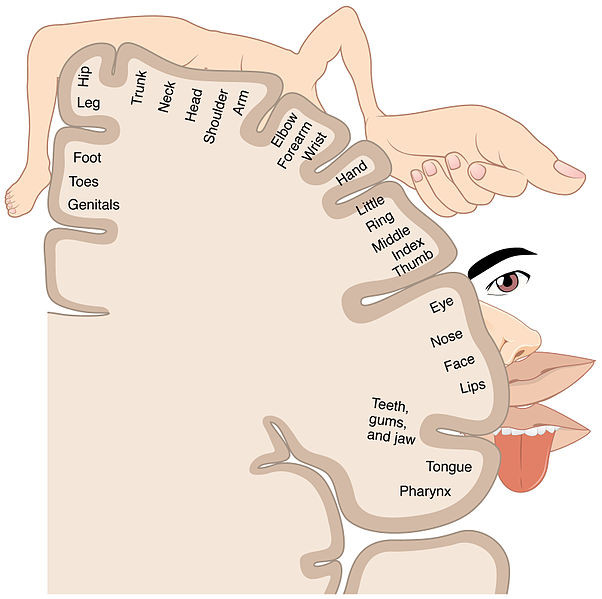 The thalamus is a midline symmetrical structure within the brain of vertebrates including humans; it is situated between the cerebral cortex and midbrain, and surrounds the third ventricle.

Its function includes relaying sensory and motor signals to the cerebral cortex, along with the regulation of consciousness, sleep, and alertness.