The vestibulocochlear nerve (also known as the auditory vestibular nerve and cranial nerve VIII) has axons that carry the modalities of hearing and equilibrium.

This is the nerve along which the sensory cells (the hair cells) of the inner ear transmit information to the brain. It emerges from the pons and exits the inner skull via the internal acoustic meatus (or internal auditory meatus) in the temporal bone. 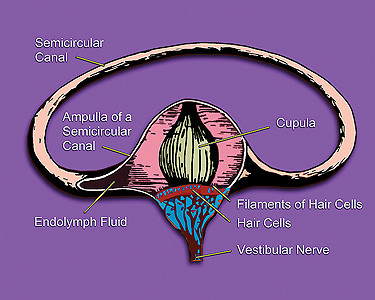 Processes from the organ of Corti (the receptor organ for hearing) conduct afferent transmission to the spiral ganglia. It is the inner hair cells of the organ of Corti that are responsible for activating the afferent receptors in response to pressure waves reaching the basilar membrane through the transduction of sound.

The vestibular nerve travels from the vestibular system of the inner ear. The vestibular ganglion houses the cell bodies of the bipolar neurons and extends processes to five sensory organs.

Three of these are the cristae, located in the ampullae of the semicircular canals. Hair cells of the cristae activate afferent receptors in response to rotational acceleration.

The other two sensory organs supplied by the vestibular neurons are the maculae of the saccule and utricle. Hair cells of the maculae activate afferent receptors in response to linear acceleration.