When sound waves reach the ear, the ear transduces this mechanical stimulus (pressure) into a nerve impulse (electrical signal) that the brain perceives as sound.

Vibrating objects, such as vocal cords, create sound waves or pressure waves in the air. When these pressure waves reach the ear, the ear transduces this mechanical stimulus (pressure wave) into a nerve impulse (electrical signal) that the brain perceives as sound. The pressure waves strike the tympanum, causing it to vibrate. The mechanical energy from the moving tympanum transmits the vibrations to the three bones of the middle ear. The stapes transmits the vibrations to a thin diaphragm called the oval window, which is the outermost structure of the inner ear. 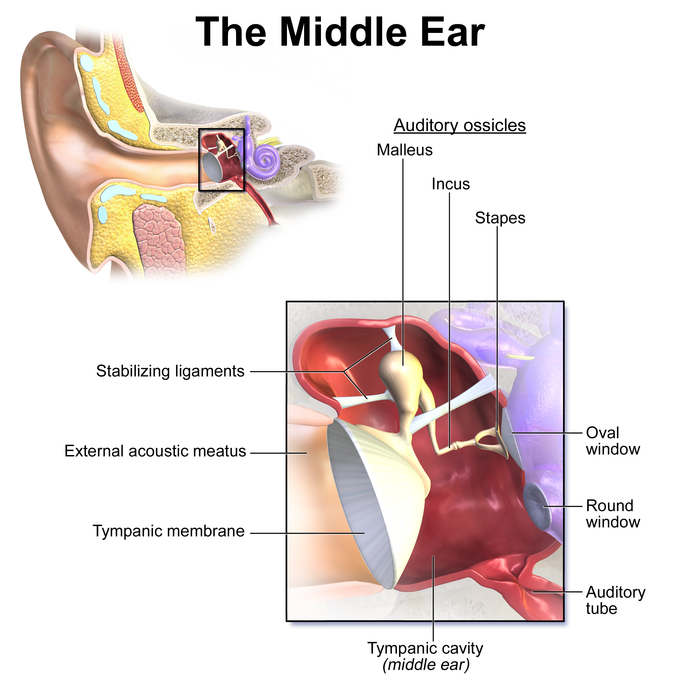 The structures of the inner ear are found in the labyrinth, a bony, hollow structure that is the most interior portion of the ear. Here, the energy from the sound wave is transferred from the stapes through the flexible oval window and to the fluid of the cochlea. The vibrations of the oval window create pressure waves in the fluid (perilymph) inside the cochlea. The cochlea is a whorled structure, like the shell of a snail, and it contains receptors for transduction of the mechanical wave into an electrical signal. Inside the cochlea, the basilar membrane is a mechanical analyzer that runs the length of the cochlea, curling toward the cochlea’s center. 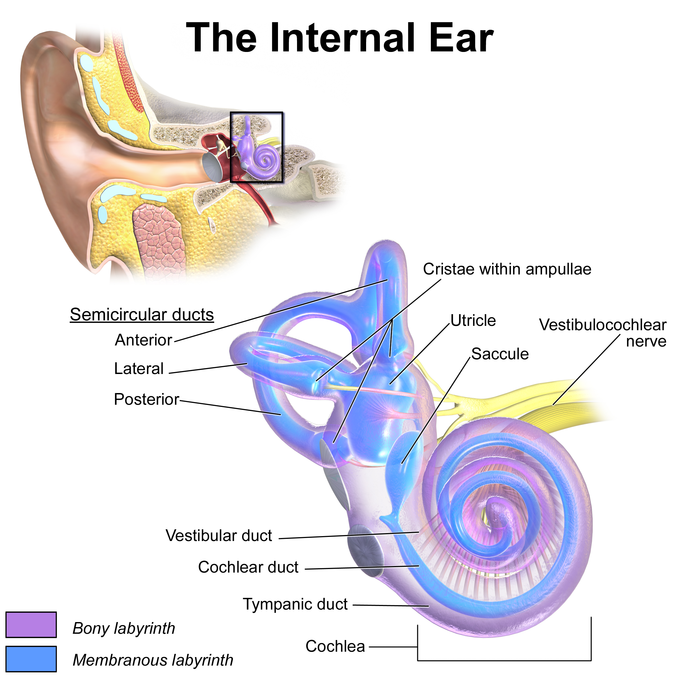 Inner ear: The inner ear can be divided into three parts: the semicircular canals, the vestibule, and the cochlea, all of which are located in the temporal bone. 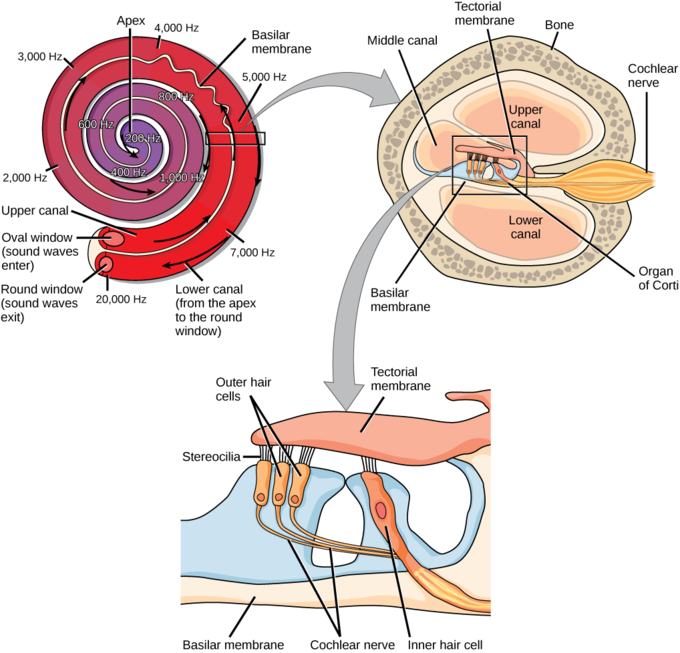 Transduction: In the human ear, sound waves cause the stapes to press against the oval window. Vibrations travel up the fluid-filled interior of the cochlea. The basilar membrane that lines the cochlea gets continuously thinner toward the apex of the cochlea. Different thicknesses of membrane vibrate in response to different frequencies of sound. Sound waves then exit through the round window. In the cross section of the cochlea (top right figure), note that in addition to the upper canal and lower canal, the cochlea also has a middle canal. The organ of Corti (bottom image) is the site of sound transduction. Movement of stereocilia on hair cells results in an action potential that travels along the auditory nerve.

The site of transduction is in the organ of Corti (spiral organ). It is composed of hair cells held in place above the basilar membrane like flowers projecting up from soil, with their exposed short, hair-like stereocilia contacting or embedded in the tectorial membrane above them. The inner hair cells are the primary auditory receptors and exist in a single row, numbering approximately 3,500. The stereocilia from inner hair cells extend into small dimples on the tectorial membrane’s lower surface. The outer hair cells are arranged in three or four rows. They number approximately 12,000, and they function to fine tune incoming sound waves. The longer stereocilia that project from the outer hair cells actually attach to the tectorial membrane. All of the stereocilia are mechanoreceptors, and when bent by vibrations they respond by opening a gated ion channel (refer to [link]). As a result, the hair cell membrane is depolarized, and a signal is transmitted to the chochlear nerve. Intensity (volume) of sound is determined by how many hair cells at a particular location are stimulated.

The hair cells are arranged on the basilar membrane in an orderly way. The basilar membrane vibrates in different regions, according to the frequency of the sound waves impinging on it. Likewise, the hair cells that lay above it are most sensitive to a specific frequency of sound waves. Hair cells can respond to a small range of similar frequencies, but they require stimulation of greater intensity to fire at frequencies outside of their optimal range. The difference in response frequency between adjacent inner hair cells is about 0.2 percent. Compare that to adjacent piano strings, which are about six percent different. Place theory, which is the model for how biologists think pitch detection works in the human ear, states that high frequency sounds selectively vibrate the basilar membrane of the inner ear near the entrance port (the oval window). Lower frequencies travel farther along the membrane before causing appreciable excitation of the membrane. The basic pitch-determining mechanism is based on the location along the membrane where the hair cells are stimulated. The place theory is the first step toward an understanding of pitch perception. Considering the extreme pitch sensitivity of the human ear, it is thought that there must be some auditory “sharpening” mechanism to enhance the pitch resolution.

When sound waves produce fluid waves inside the cochlea, the basilar membrane flexes, bending the stereocilia that attach to the tectorial membrane. Their bending results in action potentials in the hair cells, and auditory information travels along the neural endings of the bipolar neurons of the hair cells (collectively, the auditory nerve) to the brain. When the hairs bend, they release an excitatory neurotransmitter at a synapse with a sensory neuron, which then conducts action potentials to the central nervous system. The cochlear branch of the vestibulocochlear cranial nerve sends information on hearing. The auditory system is very refined, and there is some modulation or “sharpening” built in. The brain can send signals back to the cochlea, resulting in a change of length in the outer hair cells, sharpening or dampening the hair cells’ response to certain frequencies.