Glucagon is a peptide hormone that works in conjunction with insulin to maintain a stable blood glucose level. 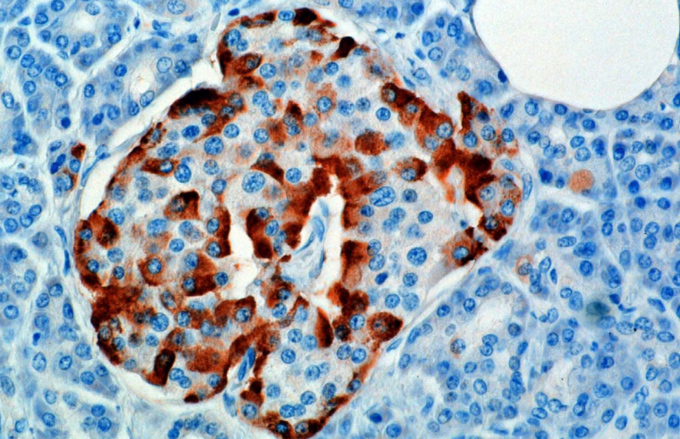 Glucagon staining: This is an image from a microscope stained for glucagon.

Glucagon is produced by alpha cells in the pancreas and elevates the concentration of glucose in the blood by promoting gluconeogenesis and glycogenolysis. Glucose is stored in the liver in the form of the polysaccharide glycogen, which is a glucan.

Liver cells have glucagon receptors and when glucagon binds to the liver cells they convert glycogen into individual glucose molecules and release them into the bloodstream—this process is known as glycogenolysis. As these stores become depleted, glucagon then encourages the liver and kidney to synthesize additional glucose by gluconeogenesis. Glucagon also turns off glycolysis in the liver, causing glycolytic intermediates to be shuttled to gluconeogenesis that can induce lipolysis to produce glucose from fat.

Insulin is produced by beta cells in the pancreas and acts to oppose the functions of glucagon. It’s main role is to promote the conversion of circulating glucose into glycogen via glycogenesis in the liver and muscle cells.

Insulin also inhibits
gluconeogenesis and promotes the storage of glucose in fat through lipid synthesis and also by inhibiting lipolysis.

Patients with type 1 diabetes depend on external insulin (most commonly injected subcutaneously) for their survival because the hormone is no longer produced internally.