Nuclear receptors function as transcription factors because they can bind to DNA and regulate gene expression.

Hormones can alter cell activity by binding with a receptor. Receptors can either directly influence gene expression and thus cell activity, or induce a secondary signaling cascade that will in turn influence cell activity.

Nuclear receptors can be classified into two broad classes according to their mechanism of action and their sub-cellular distribution in the absence of ligand. Type I nuclear receptors are located in the cytosol. Upon binding to a hormone the receptor and hormone translocate into the nucleus, and bind to specific sequences of DNA known as hormone response elements (HREs). 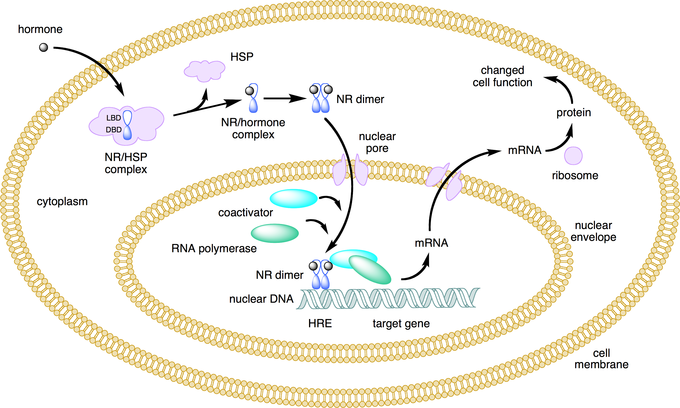 Lipid soluble hormones directly regulate gene expression: This figure depicts the mechanism of a class I nuclear receptor (NR) that, in the absence of ligand, is located in the cytosol. Hormone binding to the NR triggers translocation to the nucleus, where the NR binds to a specific sequence of DNA known as a hormone response element (HRE).

For lipophobic hormones that cannot pass the cellular membrane, activity is mediated and amplified within a cell by the action of second messenger mechanisms (molecules that relay signals from receptors on the cell surface to target molecules inside the cell in the cytoplasm or nucleus).

Most hormone receptors are G protein-coupled receptors. Upon hormone binding, the receptor undergoes a conformational change and exposes a binding site for a G-protein. The G-protein is bound to the inner membrane of the cell and consists of three sub-units: alpha, beta, and gamma.

Upon binding to the receptor, it releases a GTP molecule, at which point the alpha sub-unit of the G-protein breaks free from the beta and gamma sub-units and is able to move along the inner membrane until it contacts another membrane-bound protein: the primary effector.