Thyroid hormones (T4 and T3) are produced by the follicular cells of the thyroid gland and regulated by thyroid-stimulating hormone (TSH).

The thyroid hormones
thyroxine (T4) and triiodothyronine (T3) are produced from thyroid follicular cells within the thyroid gland, a process regulated by the thyroid-stimulating hormone secreted by the anterior pituitary gland.

Thyroglobulin, the pre-cursor of T4 and T3, is produced by the thyroid follicular cells before being secreted and stored in the follicular lumen. Iodide is actively absorbed from the bloodstream by a process called iodide trapping. In this process, sodium is co-transported with iodide from the basolateral side of the membrane into the cell, and then concentrated in the thyroid follicles to about thirty times its concentration in the blood.

Proteases digest iodinated thyroglobulin, releasing the hormones T4 and T3, the biologically-active agents central to metabolic regulation. T3 is identical to T4, but it has one less iodine atom per molecule.

T4 is believed to be a pro-hormone and a reservoir for the more active and main thyroid hormone T3. T4 is converted as required in the tissues by iodothyronine deiodinase. 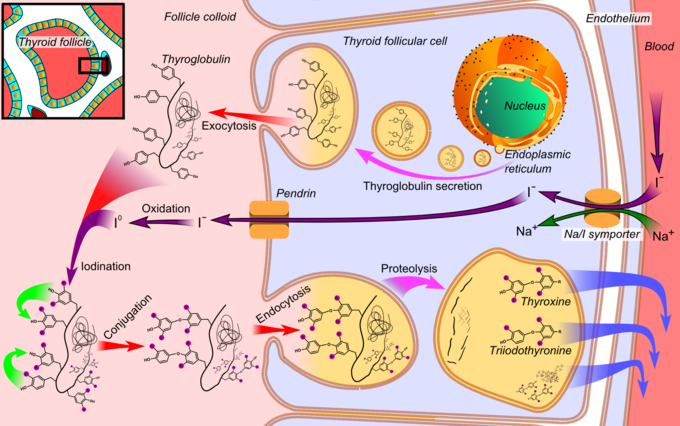 This enlarged endemic colloid goiter has the effect of increasing the thyroid’s ability to trap more iodide, compensating for the iodine deficiency and allowing it to produce adequate amounts of thyroid hormone.