The main function of blood is to supply oxygen to tissues and remove carbon dioxide. Other functions include pH regulation and thermoregulation.

Blood performs many functions critical for sustaining metabolic physiological processes in complex organisms. Blood is involved in everything from gas exchange to nutrient transport to immune system and homeostatic functions.

Blood’s primary function is to transport molecules around the body to support critical metabolic processes. All cells require oxygen and glucose to undergo cellular respiration. Tissues cannot survive very long without these two molecules. Disruption of this process is most dangerous to the brain, which can survive only about two minutes without oxygen and glucose. These terms are used to describe oxygen or blood deficiency to tissues in the body:

Most tissues can survive in a hypoxic or ischemic state for a few hours before infarction sets in. Heart infarction, which often occurs during a heart attack, will cause infarction in other tissues as blood is no longer pumped.

In addition to oxygen and glucose, the blood transports several other important molecules. Carbon dioxide, which travels through the blood mostly as bicarbonate, is transported from tissues as a waste product of cellular respiration to the lungs during gas exchange. Many hormones (chemical messengers) also travel through the blood as a form of communication between interrelated organs, which are often involved in homeostatic control. 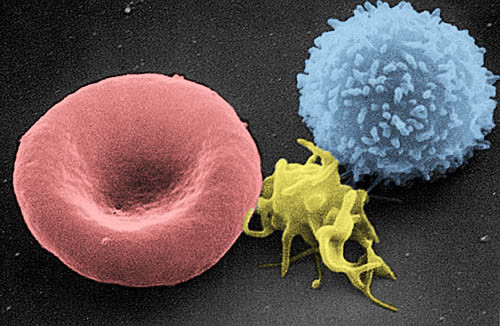 Cellular Components of Blood: From left, diagrams of an erythrocyte, thrombocyte, and leukocyte.

White blood cells and antibodies circulate through the blood and destroy any foreign invaders ( pathogens ) that they encounter. Inflammation occurs in blood vessels due to the release of inflammatory mediators in the blood. This causes vasodilation and redness as other white blood cells are drawn to the region through the bloodstream to destroy infectious pathogens. They may also find molecular markers of pathogens called antigens and take them to lymphatic organs to stimulate powerful adaptive immune system responses.

The blood also has the ability to undergo clotting in response to vascular injury such as bleeding. Normally a series of clotting and anti-clotting factors are kept in balance through the blood so that no clotting occurs, but when endothelial cells are injured, the clotting factors are increased and cause blood to clot. Circulating platelets in the blood arrive at the injury site and form a mesh and plug to coagulate the blood and stop the bleeding. Wound healing can only begin after this clotting response occurs.

Blood is involved in maintaining homeostasis through several ways. Temperature regulation occurs in part as a result of the dilation and constriction of vessels in the blood. Blood pH is a regulated variable of the respiratory system, because the pH of blood is directly proportional to the amount of carbon dioxide dissolved in blood. This makes blood pH an indicator of respiratory homeostasis. Blood glucose levels are regulated by insulin and glucagon secretion. Blood volume and blood pressure are directly proportional regulated variables that are tied to the activity of the heart and the fluid retention of the kidney. If any of these variables are too high or too low, severe problems can occur. For that reason, a number of complex negative feedback mechanisms exist to keep all variables within homeostatic range, despite influences from the internal and external environments.