Vitamin K is an essential factor of the coagulation cascade.

Coagulation is a complex cascade that requires many different cofactors and molecules to occur. Vitamin K, calcium, and phospholipids are necessary cofactors for proper coagulation, and people deficient in these substances will be more susceptible to uncontrolled bleeding. 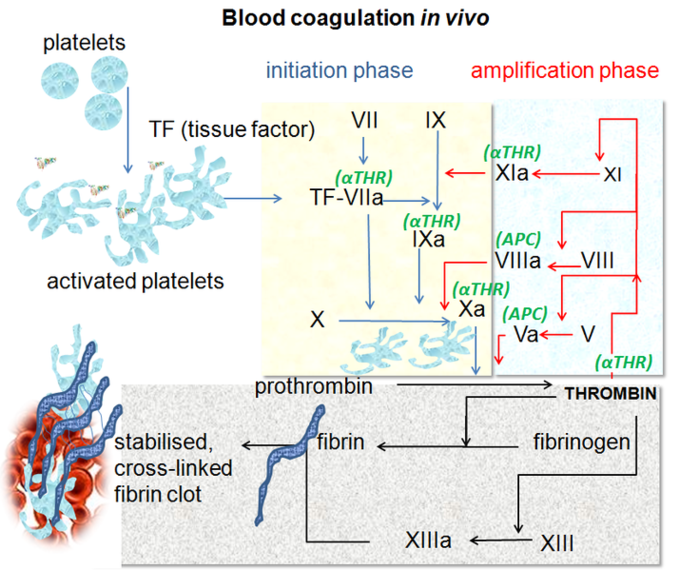 Vitamin K deficiency is associated with impaired coagulation function and excessive bleeding and hemorrhage (internal bleeding, often severe). This can be caused by poor diet, malabsorption in the intestines, or liver failure. Those with vitamin K deficiency produce alternative proteins that improperly bind with phospholipids, which also contributes to the lack of coagulant function.

Calcium and phospholipids (a platelet membrane constituent) are required cofactors for prothrombin activation enzyme complexes to function. This enzyme is called tenase, and converts prothrombin to thrombin. Calcium mediates the binding of the tenase enzyme complexes (via the terminal gamma-carboxy residues on FXa and FIXa) to the phospholipid surfaces expressed by platelets, which in turn activates prothrombin to produce thrombin, which then produces fibrin from fibrinogen. Calcium acts as a catalyst for this reaction, speeding up the rate of the reaction to occur within the time frame of the factors involved in the coagulation cascade. Calcium is also required to to synthesize the anticoagulant Protein C (along with vitamin K).

Calcium deficiencies inhibit proper blood coagulation. This can be caused by a nutritional deficiency or acute problems in which calcium is allocated elsewhere in the blood. Phosopholipid deficiency is also associated with thrombocytopenia (platelet deficiency) because the phospholipids involved with clotting come from platelets. Thrombocytopenia causes more severe issues with blood clotting as the platelet plug will not be able to form or activate the coagulation cascade.