The myocardium (cardiac muscle) is the thickest section of the heart wall and contains cardiomyocytes, the contractile cells of the heart.

The structure of cardiac muscle shares some characteristics with skeletal muscle, but has many distinctive features of its own. Cardiomyocytes are shorter than skeletal myocytes and have fewer nuclei. Each muscle fiber connects to the plasma membrane (sarcolemma) with distinctive tubules ( T-tubule ). At these T-tubules, the sarcolemma is studded with a large number of calcium channels which allow calcium ion exchange at a rate much faster than that of the neuromuscular junction in skeletal muscle. The flux of calcium ions into the muscle cells causes stimulates an action potential, which causes the cells to contract.

Cardiac muscle, like skeletal muscle, is comprised of sarcomeres, the basic, contractile units of muscle. Sarcomeres are composed of long, fibrous proteins that slide past each other when the muscles contract and relax. Two of the important proteins found in sarcomeres are myosin, which forms the thick filament, and actin, which forms the thin filament. Myosin has a long, fibrous tail and a globular head that binds to actin. The myosin head also binds to ATP, the source of energy for cellular metabolism, and is required for the cardiomyocytes to sustain themselves and function normally. Together, myosin and actin form myofibril filaments, the elongated, contractile threads found in muscle tissue. Cardiac muscle and skeletal muscle both contain the protein myoglobin, which stores oxygen.

Cardiac muscle is adapted to be highly resistant to fatigue. Cardiomyocytes have a large number of mitochondria, enabling continuous aerobic respiration. Cardiac muscle also has a large blood supply relative to its size, which provides a continuous stream of nutrients and oxygen while providing ample removal of metabolic waste. 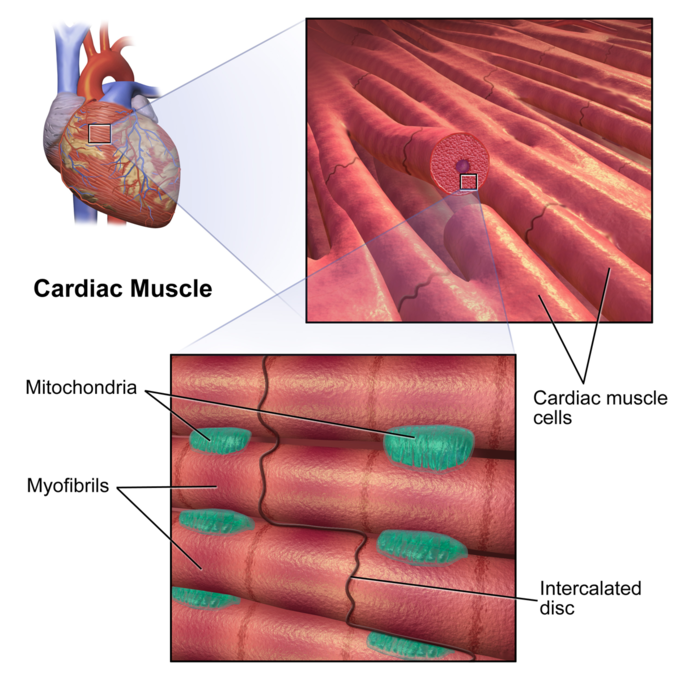 Cardiac Muscle: The tissue structure of cardiac muscle contains sarcomeres that are made of myofibrils with intercalated disks, that contain cardiomyocytes and have many mitocondria.

The thickness of the myocardium may change in some individuals as a compensatory adaptation to disease, either thickening and becoming stiff or becoming thinner and flabby. Cardiac hypertrophy is a common result of hypertension (high blood pressure) in which the cells of the myocardium enlarge as an adaptive response to pumping against the higher pressure. Eventually, hypertrophy may become so severe that heart failure occurs when the heart becomes so stiff that it can no longer pump blood. A flabby heart is typically the result of myocardial infections, in which the heart muscle becomes so weak that it cannot efficiently pump blood, which also leads to heart failure. 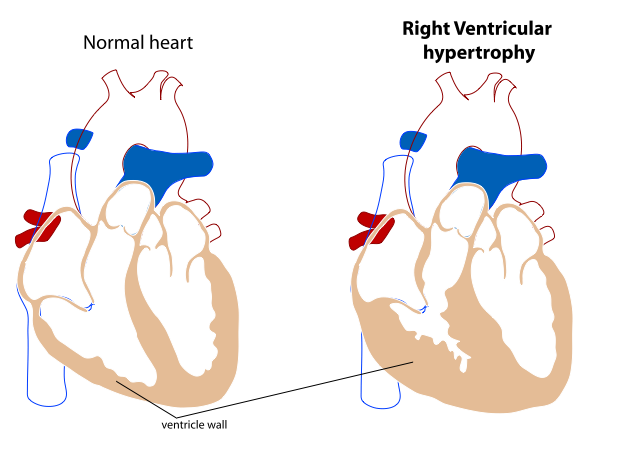 Right Ventricular Hypertrophy: If the heart adapts to become too thick, it will not be able to pump blood as efficiently, and heart failure may occur.