An electrocardiogram, or ECG, is a recording of the heart’s electrical activity as a graph over a period of time.

An electrocardiogram (ECG or EKG) is a recording of the heart’s electrical activity as a graph over a period of time, as detected by electrodes attached to the outer surface of the skin and recorded by a device external to the body. The graph can show the heart’s rate and rhythm. It can also detect enlargement of the heart, decreased blood flow, or the presence of current or past heart attacks. ECGs are the primary clinical tool to measure electrical and mechanical performance of the heart.

The ECG works by detecting and amplifying tiny electrical changes on the skin that occur during heart muscle depolarization. The output for the ECG forms a graph that shows several different waves, each corresponding to a different electrical and mechanical event within the heart. Changes in these waves are used to identify problems with the different phases of heart activity.

ECG: Illustration of a patient undergoing a 12-lead ECG. 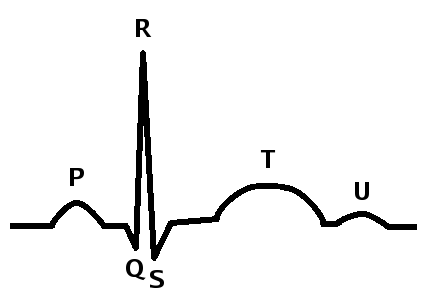 Normal Systole ECG: The U wave is not visible in all ECGs.

Increased or decreased P waves can indicate problems with the potassium ion concentration in the body that will alter nerve activity. A missing P wave indicates atrial fibrillation, a cardiac arrhythmia in which the heart beats irregularly, preventing efficient ventricular diastole. This is generally not fatal on its own.

The QRS complex refers to the combination of the Q, R, and S waves, and indicates ventricular depolarization and contraction (ventricular systole). The Q and S waves are downward waves while the R wave, an upward wave, is the most prominent feature of an ECG. The QRS complex represents action potentials moving from the AV node, through the bundle of His and left and right branches and Purkinje fibers into the ventricular muscle tissue. Abnormalities in the QRS complex may indicate cardiac hypertrophy or myocardial infarctions.

The T Wave and ST Segment

Animation of a Normal ECG Wave: The red lines represent the movement of the electrical signal through the heart.

Following the T wave is the U wave, which represents repolarization of the Purkinje fibers. It is not always visible on an ECG because it is a very small wave in comparison to the others.

When ECG output shows no identifiable P waves, QRS complexes, or T waves, it imdicates ventricular fibrillation, a severe arrhythmia. During ventricular fibrillation, the heart beats extremely fast and irregularly and can no longer pump blood, acting as a mass of quivering, disorganized muscle movements. Ventricular fibrillation will cause sudden cardiac death within minutes unless electrical resuscitation (with an AED) is performed immediately. It generally occurs with myocardial infarcations and heart failure, and is thought to be caused by action potentials that re-enter the AV nodes from the muscle tissue and induce rapid, irregular, weak contractions of the heart that fail to pump blood.