Blood vessels are key components of the systemic and pulmonary circulatory systems that distribute blood throughout the body. There are three major types of blood vessels: arteries that carry blood away from the heart, branching into smaller arterioles throughout the body and eventually forming the capillary network. The latter facilitates efficient chemical exchange between tissue and blood. Capillaries in turn merge into venules, then into larger veins responsible for returning the blood to the heart. The junctions between vessels are called anastomoses.

Arteries and veins are comprised of three distinct layers while the much smaller capillaries are composed of a single layer.

Surrounding the tunica intima is the tunica media, comprised of smooth muscle cells and elastic and connective tissues arranged circularly around the vessel. This layer is much thicker in arteries than in veins. Fiber composition also differs; veins contain fewer elastic fibers and function to control caliber of the arteries, a key step in maintaining blood pressure.

The outermost layer is the tunica externa or tunica adventitia, composed entirely of connective fibers and surrounded by an external elastic lamina which functions to anchor vessels with surrounding tissues. The tunica externa is often thicker in veins to prevent collapse of the blood vessel and provide protection from damage since veins may be superficially located. 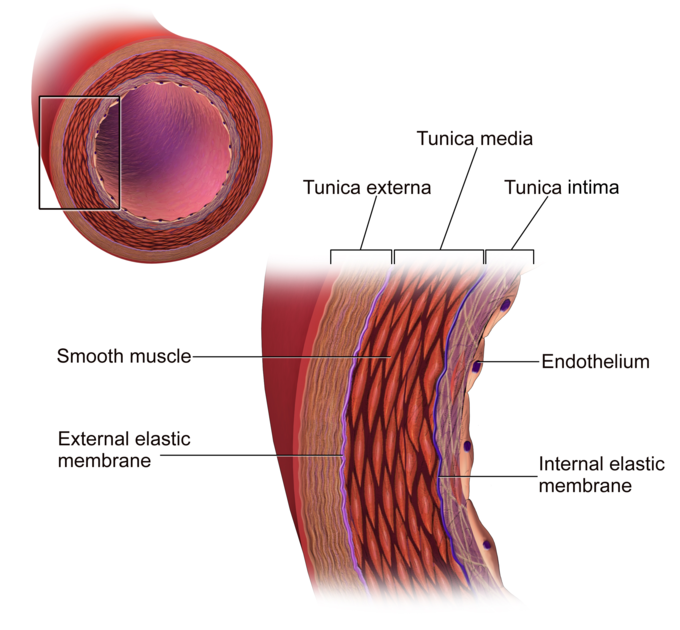 A major structural difference between arteries and veins is the presence of valves. In arteries, the blood is pumped under pressure from the heart, so backflow cannot occur. However, passing through the capillary network results in a decrease in blood pressure, meaning that backflow of blood is possible in veins. To counteract this, veins contain numerous one-direction valves that prevent backflow.