The lymphatic system plays a prominent role in immune function, fatty acid absorption, and removal of interstitial fluid from tissues.

The lymphatic system is a blunt-ended linear flow system, in which tissue fluids, cells, and large extracellular molecules, collectively called lymph, are drained into the initial lymphatic capillary vessels that begin at the interstitial spaces of tissues and organs. They are then transported to thicker collecting lymphatics, which are embedded with multiple lymph nodes, and are eventually returned to the blood circulation through the left and right subclavian veins and into the vena cava. They drain into venous circulation because there is lower blood pressure in veins, which minimizes the impact of lymph cycling on blood pressure. Lymph nodes located at junctions between the lymph vessels also filter the lymph fluid to remove pathogens and other abnormalities.

Fluid removal from tissues prevents the development of edema. Edema is any type of tissue swelling from increased flow of interstitial fluid into tissues relative to fluid drainage. While edema is a normal component of the inflammation process, in some cases it can be very harmful. Cerebral and pulmonary edema are especially problematic, which is why lymph drainage is so important. Abnormal edema can still occur if the drainage components of the lymph vessels are obstructed. 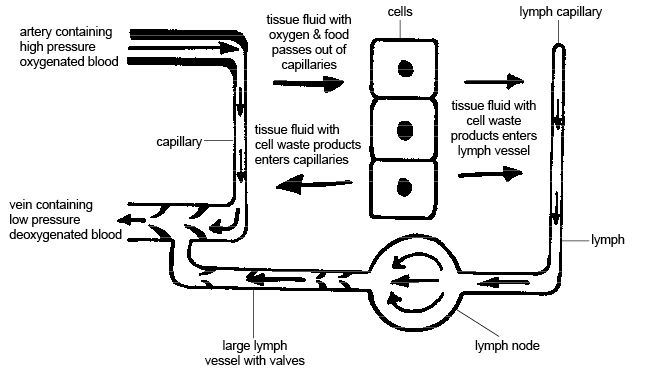 The lymphatic system also facilitates fatty acid absorption from the digestive system. During fat digestion, fatty acids are digested, emulsified, and converted within intestinal cells into a lipoprotein called chylomicrons. Lymph drainage vessels that line the intestine, called lacteals, absorb the chylomicrons into lymph fluid. The lymph vessels then take the chylomicrons into blood circulation, where they react with HDL cholesterols and are then broken down in the liver.

In addition to tissue fluid homeostasis, the lymphatic system serves as a conduit for transport of cells involved in immune system function. Most notably, highly-specialized white blood cells called lymphocytes and antigen -presenting cells are transported to regional lymph nodes, where the immune system encounters pathogens, microbes, and other immune elicitors that are filtered from the lymph fluid. Much of the adaptive immune system response, which is mediated by dendritic cells, takes place in the lymph nodes. Lymphatic vessels, which uptake various antigens from peripheral tissues, are positively regulated by chemokines/cytokines secreted by various immune cells during inflammation. This allows antigens to enter lymph nodes, where dendritic cells can present them to lymphocytes to trigger an adaptive immune response.

While the lymphatic system is important for transporting immune cells, its transport capabilities can also provide a pathway for the spread of cancer. Lymph circulation is one of the main ways that tumors can spread to distant parts of the body, which is difficult to prevent.