Lymphoid tissue consists of many organs that play a role in the production and maturation of lymphocytes in the immune response.

Central or primary lymphoid organs generate lymphocytes from immature progenitor cells such as lymphoblasts. The thymus gland and bone marrow contain primary lymphoid tissue where B and T cells are generated.

Secondary or peripheral lymphoid organs maintain mature naive lymphocytes until an adaptive immune response is initiated. During antigen presentation, such as from the dendritic cells, lymphocytes migrate to germinal centers of the secondary lymphoid tissues, where they undergo clonal expansion and affinity maturation. Mature lymphocytes ill then recirculate between the blood and peripheral lymphoid organs until they encounter the specific antigens where they perform their immune response functions.

Secondary lymphoid tissue provides the environment for the antigens to interact with the lymphocytes. It is found mainly in the lymph nodes, but also in the lymphoid follicles in tonsils, Peyer’s patches, spleen, adenoids, skin, and other areas associated with the mucosa-associated lymphoid tissue (MALT). In addition to supporting B and T lymphocyte activation, other secondary lymphoid organs perform other unique functions, such as the spleen’s ability to filter blood and the tonsil’s ability to capture antigens in the upper respiratory tract. 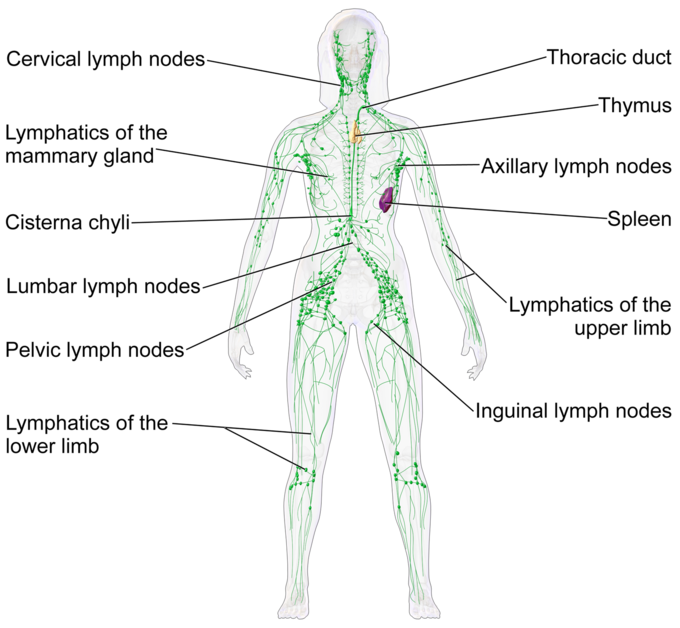 Lymphatic tissue begins to develop by the end of the fifth week of embryonic development. Lymphatic vessels develop from lymph sacs that arise from developing veins, which are derived from mesoderm, the inner tissue layer of the embryo. Development of lymphatic tissue starts when venous endothelial tissues differentiate into lymphatic endothelial tissues. The lymphatic endothelial cells proliferate into sacs that eventually become lymph nodes, with afferent and efferent vessels that flow out from the lymph nodes. This process begins with he lymph nodes closest to the thoracic and right lymph ducts, which arises from immature subclavian-jugular vein junction. The lymph nodes organized around other lymph trunks, such as those in the abdomen and intestine, develop afterwards from nearby veins. Smaller lymph vessels and lymphatic capillaries develop after that until the lymphatic system is completed at the closed end of each lymphatic capillary.

More specialized primary lymph tissue, such as the thymus, develops from pharyngeal pouches (embryonic structures that differentiate into organs near the pharynx and throat) by the eighth week of gestation.