Covalent bonds result from a sharing of electrons between two atoms and hold most biomolecules together.

Adenosine triphosphate, or ATP, is the most-commonly used cofactor in all of biology. Its biosynthesis involves breaking the triple bond of molecular nitrogen, or N2, followed by the formation of several carbon-nitrogen single and double bonds.

The octet rule can be satisfied by the sharing of electrons between atoms to form covalent bonds. These bonds are stronger and much more common than are ionic bonds in the molecules of living organisms. Covalent bonds are commonly found in carbon-based organic molecules, such as DNA and proteins. Covalent bonds are also found in inorganic molecules such as H2O, CO2, and O2. One, two, or three pairs of electrons may be shared between two atoms, making single, double, and triple bonds, respectively. The more covalent bonds between two atoms, the stronger their connection. Thus, triple bonds are the strongest.

The strength of different levels of covalent bonding is one of the main reasons living organisms have a difficult time in acquiring nitrogen for use in constructing nitrogenous molecules, even though molecular nitrogen, N2, is the most abundant gas in the atmosphere. Molecular nitrogen consists of two nitrogen atoms triple bonded to each other. The resulting strong triple bond makes it difficult for living systems to break apart this nitrogen in order to use it as constituents of biomolecules, such as proteins, DNA, and RNA.

There are two types of covalent bonds: polar and nonpolar. In a polar covalent bond, the electrons are unequally shared by the atoms because they are more attracted to one nucleus than the other. The relative attraction of an atom to an electron is known as its electronegativity: atoms that are more attracted to an electron are considered to be more electronegative. Because of the unequal distribution of electrons between the atoms of different elements, a slightly positive (δ+) or slightly negative (δ-) charge develops. This partial charge is known as a dipole; this is an important property of water and accounts for many of its characteristics. The dipole in water occurs because oxygen has a higher electronegativity than hydrogen, which means that the shared electrons spend more time in the vicinity of the oxygen nucleus than they do near the nucleus of the hydrogen atoms. 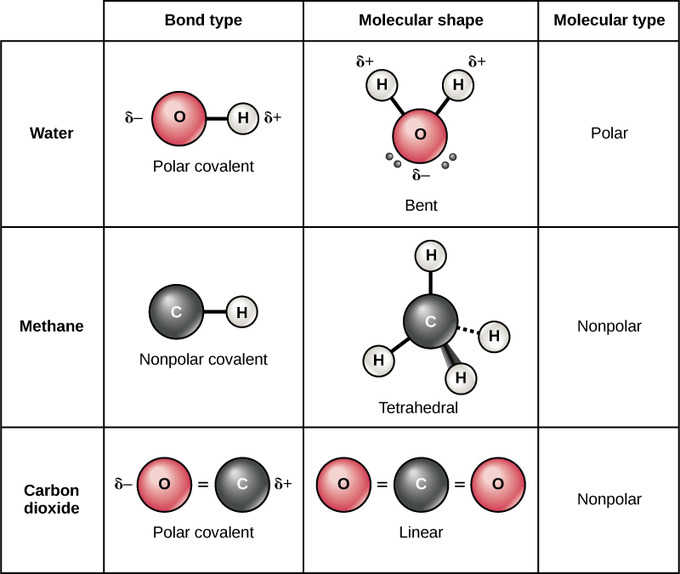 Polar and Nonpolar Covalent Bonds: Whether a molecule is polar or nonpolar depends both on bond type and molecular shape. Both water and carbon dioxide have polar covalent bonds, but carbon dioxide is linear, so the partial charges on the molecule cancel each other out.

Nonpolar covalent bonds form between two atoms of the same element or between different elements that share electrons equally. For example, molecular oxygen (O2) is nonpolar because the electrons will be equally distributed between the two oxygen atoms. The four bonds of methane are also considered to be nonpolar because the electronegativies of carbon and hydrogen are nearly identical.

Not all bonds are ionic or covalent; weaker bonds can also form between molecules. Two types of weak bonds that frequently occur are hydrogen bonds and van der Waals interactions. Without these two types of bonds, life as we know it would not exist.

Hydrogen bonds provide many of the critical, life-sustaining properties of water and also stabilize the structures of proteins and DNA, the building block of cells. When polar covalent bonds containing hydrogen are formed, the hydrogen atom in that bond has a slightly positive charge (δ+) because the shared electrons are pulled more strongly toward the other element and away from the hydrogen atom. Because the hydrogen has a slightly positive charge, it’s attracted to neighboring negative charges. The weak interaction between the δ+ charge of a hydrogen atom from one molecule and the δ- charge of a more electronegative atom is called a hydrogen bond. Individual hydrogen bonds are weak and easily broken; however, they occur in very large numbers in water and in organic polymers, and the additive force can be very strong. For example, hydrogen bonds are responsible for zipping together the DNA double helix.

Like hydrogen bonds, van der Waals interactions are weak interactions between molecules. Van der Waals attractions can occur between any two or more molecules and are dependent on slight fluctuations of the electron densities, which can lead to slight temporary dipoles around a molecule. For these attractions to happen, the molecules need to be very close to one another. These bonds, along with hydrogen bonds, help form the three-dimensional structures of the proteins in our cells that are required for their proper function.