Antimicrobial peptides are an evolutionarily-conserved component of the innate immune response found among all classes of life.

Antimicrobial peptides (also called host defense peptides) are an evolutionarily-conserved component of the innate immune response found among all known species. These peptides are found in many of the mucus membranes across the human body and are therefore considered to be part of the barrier immune system. The function of these peptides is to kill microbial pathogens and prevent them from entering the body.

Antimicrobial peptides are a unique and diverse group of molecules. As peptides, they consist of chains of amino acids that determine their composition and structure. These peptides have a stronger positive than negative charge, which is an important component of their selectivity. They also include hydrophobic and hydrophilic groups that enable them to latch onto other molecules (often lipids) through intermolecular forces, such as the lipid bilayer that forms cell membranes.

The secondary structures of these molecules follow four themes, including i) α-helical, ii) β-stranded due to the presence of two or more disulfide bonds, iii) β-hairpin or loop due to the presence of a single disulfide bond and/or cyclization of the peptide chain, and iv) extended. Many of these peptides are unstructured and inactive in free solution, and fold into their final configuration upon reaching mucus membranes. The amphipathicity (hydrophilic and hydrophobic ends) and positive charge of peptides are their defining structural features.

The modes of action by which antimicrobial peptides kill bacteria are varied and include disrupting cell membranes, interfering with metabolism, and damaging organelles. The initial contact between the peptide and target organism is electrostatic due to the force of negative and positive ionic charge. The amino acid composition, amphipathicity, cationic charge, and size allow them to attach to and insert into membrane bilayers to form pores by barrel-stave, carpet, or toroidal-pore mechanisms. 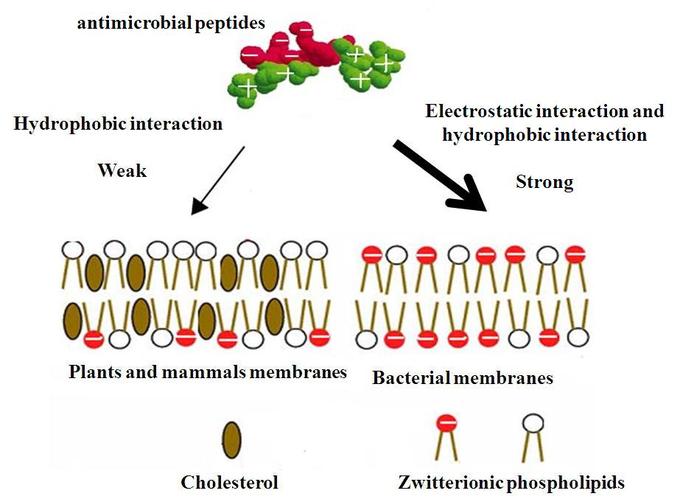 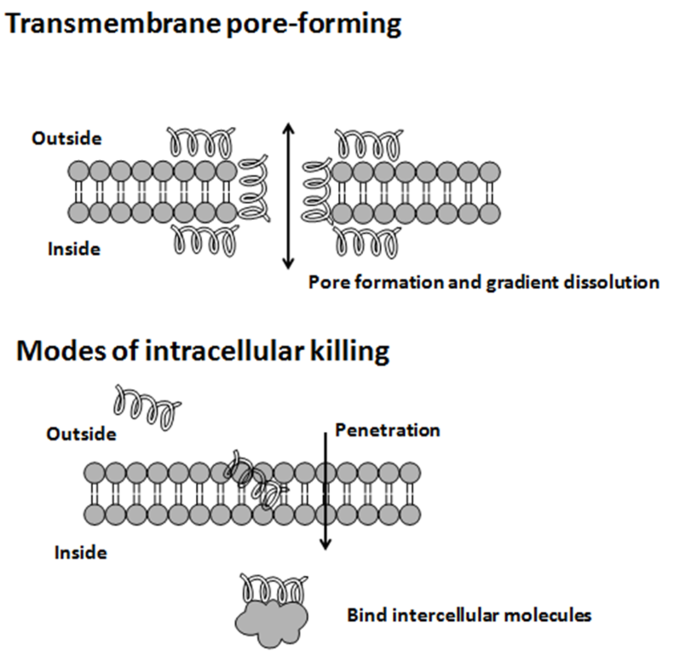 Other antimicrobial mechanisms include intracellular binding models. These involve inhibition of cell wall synthesis, alteration of the cytoplasmic membrane, activation of autolysin, inhibition of DNA, RNA, and protein synthesis, and inhibition of certain bacterial enzymes. However, in many cases, the exact killing mechanism is unknown. In general, the antimicrobial activity of these peptides is determined by measuring the minimal inhibitory concentration (MIC), the lowest concentration of drug that inhibits bacterial growth and an indicator of the antimicrobial strength of that peptide.

Additionally, commensal bacteria have developed antimicrobial resistance to peptides, but they are normal flora of the body. Most never act as pathogens, though some may be opportunistic pathogens or only act as pathogens in people with certain genetic characteristics.