The adaptive immune response is mediated by B and T cells and creates immunity memory.

Cell mediated immunity is controlled by type 1 helper T cells (Th1) and cytotoxic T cells. These cells are activated by antigen-presenting cells, which causes them to rapidly mature into forms specific to that antigen. T cells then circulate through the body to destroy pathogens in several ways. Helper T cells facilitate the immune response by guiding cytotoxic T cells to pathogens or pathogen-infected cells, which they will then destroy.

Cytotoxic T cells kill pathogens in several ways, including the release of granules that contain the cytotoxins perforin and granzyme, which lyse small pores in the membrane of a pathogen. Then T-cell produced proteases enter the pathogen and induce an apoptosis response within the cell. Helper T cells secrete cytokines such as interferon-gamma, which can activate cytotoxic T cells and macrophages.

Humoral immunity refers to the component of the adaptive immune response that is caused by B cells, antibodies, and type 2 helper T cells (Th2), as well as circulating mast cells and eosinophils to a lesser extent. Its name comes from the idea that blood is one of the humors of the body, since antibodies provide passive or active immunity through circulation in the bloodstream.

Type 2 helper T cells are included in the humoral immune system because they present antigens to immature B-cells, which undergo proliferation to become specific to the presented antigen. The B cells then rapidly produce a large number of antibodies that circulate through the body’s plasma.

Antibodies provide a number of functions in humoral immunity. Six different classes of antibodies provide distinct functions and interact with different cells in the immune system. All antibodies bind to pathogens to opsonize them, which makes it easier for phagocytic cells to bind to and destroy the pathogen. They also neutralize the toxins produced by certain pathogens and provide complement pathway activation, in which circulating proteins are combined in a complex cascade that forms a membrane attack complex on a pathogen cell membrane, which lyses the cell.

Mast cells and eosinophils are considered part of the humoral immune system because they can be sensitized towards certain antigens through circulating immunoglobin E (IgE), a specific type of antibody produced by B cells. IgE binds to the mast cells and eosinophils when an antigen is detected, using a type of Fc receptor on the mast cell or eosinophil that has a high-binding affinity with IgE. This binding will cause degranulation and release of inflammatory mediators that start an immune response against the antigen. This process is the reason why memory B cells can cause hypersensitivity (allergy) formation, as circulating IgE from those memory cells will activate a rapid inflammatory and immune response. 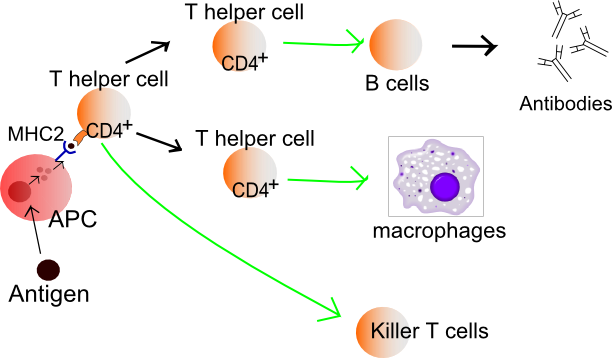