A lymphocyte is a type of white blood cell in the vertebrate immune system.

B and T cells and their various subdivisions perform many adaptive immune functions.

T cells mature in the thymus and contain T cell receptors (TCRs) that allow them to bind to antigens on MHC complexes. T cells are a major component in cell-mediated adaptive immunity because they provide a pathway for the direct killing of pathogens. There are two main types of T cells that express either CD4 or CD8 depending on signals that occur during T cell maturation, as well as less common types:

While these are the main categories of T lymphocytes, there are other subtypes within these categories as well as additional categories that are not fully understood. 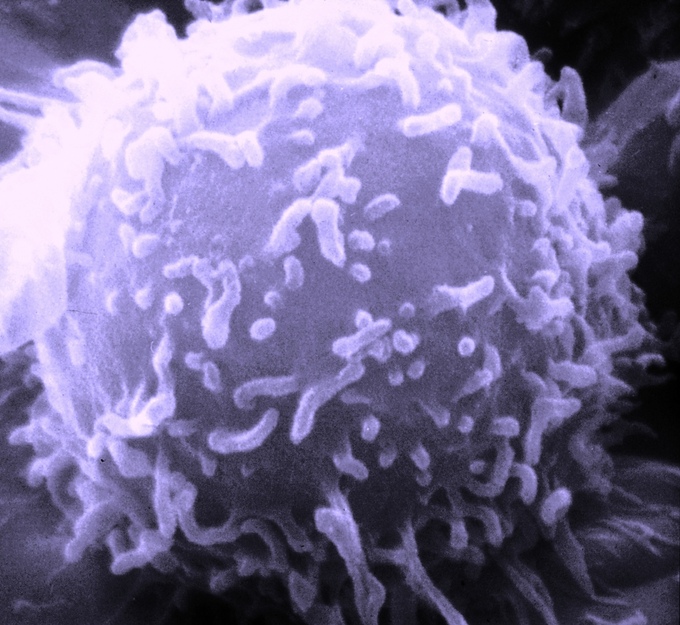 B cells are involved in humoral adaptive immunity, producing the antibodies that circulate through the plasma. They are produced and mature in bone marrow tissues and contain B cell receptors (BCRs) that bind to antigens. While in the bone marrow, B cells are sorted through positive and negative selection in a manner somewhat similiar to T cell maturation in the thymus, with the same process of killing B cells that are nonreactive to antigens or reactive to self-antigens. Instead of apoptosis, though, defective B cells are killed through other mechanisms such as clonal deletion. Mature B cells leave the thymus and travel to secondary lymphoid tissue such as the lymph nodes.

During antigen presentation, antigen-presenting cells first present antigens to T cells. Then mature helper T cells bind their antigen to naive B cells through BCRs. After antigen presentation, the naive B cells migrate together to germinal centers within the lymphoid tissue, where they undergo extensive proliferation and differentiation into different types of mature B cells. Some of the major categories of B cells that arise include:

Besides antibody production, B cells may also function in antigen presentation, though not to the degree of macrophages or dendritic cells. B cells are important to adaptive immune function but can cause problems as well. Autoreactive B cells may cause autoimmune disease that involves antibody-induced damage and inflammation. Certain B cells may undergo malignant tranformation into cancer cells such as lymphoma, in which they continually divide and form solid tumors.