Antigen presentation is a process by which immune cells capture antigens and then enable their recognition by T cells.

Antigen presentation is a process in the body’s immune system by which macrophages, dendritic cells and other cell types capture antigens, then present them to naive T-cells. The basis of adaptive immunity lies in the capacity of immune cells to distinguish between the body’s own cells and infectious pathogens. The host’s cells express “self” antigens that identify them as belonging to the self. These antigens are different from those in bacteria (“non-self” antigens) or in virally-infected host cells (“missing-self”). Antigen presentation broadly consists of pathogen recognition, phagocytosis of the pathogen or its molecular components, processing of the antigen, and then presentation of the antigen to naive (mature but not yet activated) T cells. The ability of the adaptive immune system to fight off pathogens and end an infection depends on antigen presentation.

Antigen Presenting Cells (APCs) are cells that capture antigens from within the body, and present them to naive T-cells. Many immune system cells can present antigens, but the most common types are macrophages and dendritic cells, which are two types of terminally differentiated leukocytes that arise from monocytes. Both of these APCs perform many immune functions that are important for both innate and adaptive immunity, such as removing leftover pathogens and dead neutrophils after an inflammatory response. Dendritic cells (DCs) are generally found in tissues that have contact with the external environment (such as the skin or respiratory epithelium) while macrophages are found in almost all tissues. Some types of B cells may also present antigens as well, though it is not their primary function.

APCs phagocytize exogenous pathogens such as bacteria, parasites, and toxins in the tissues and then migrate, via chemokine signals, to lymph nodes that contain naive T cells. During migration, APCs undergo a process of maturation in which they digest phagocytized pathogens and begin to express the antigen in the form of a peptide on their MHC complexes, which enables them to present the antigen to naive T cells. The antigen digestion phase is also called “antigen processing,” because it prepares the antigens for presentation. This MHC:antigen complex is then recognized by T cells passing through the lymph node. Exogenous antigens are usually displayed on MHC Class II molecules, which interact with CD4+ helper T cells.

This maturation process is dependent on signaling from other pathogen-associated molecular pattern (PAMP) molecules (such as a toxin or component of a cell membrane from a pathogen) through pattern recognition receptors (PRRs), which are received by Toll-like receptors on the DC’s body. They may also recognize damage-associated molecular pattern (DAMP) molecules, which include degraded proteins or nucleic acids released from cells that undergo necrosis. PAMPs and DAMPS are not technically considered antigens themselves, but instead are signs of pathogen presence that alert APCs through Toll-like receptor binding. However if a DC phagocytzes a PAMP or DAMP, it could be used as an antigen during antigen presentation. APCs are unable to distinguish between different types of antigens themselves, but B and T cells can due to their specificity.

T cells must be presented with antigens in order to perform immune system functions. The T cell receptor is restricted to recognizing antigenic peptides only when bound to appropriate molecules of the MHC complexes on APCs, also known in humans as Human leukocyte antigen (HLA).

Several different types of T cell can be activated by APCs, and each type of T cell is specially equipped to deal with different pathogens, whether the pathogen is bacterial, viral or a toxin. The type of T cell activated, and therefore the type of response generated, depends on which MHC complex the processed antigen-peptide binds to.

MHC Class I molecules present antigen to CD8+ cytotoxic T cells, while MHC class II molecules present antigen to CD4+ helper T cells. With the exception of some cell types (such as erythrocytes), Class I MHC is expressed by almost all host cells. Cytotoxic T cells (also known as TC, killer T cell, or cytotoxic T-lymphocyte (CTL)) are a population of T cells that are specialized for inducing the death of other cells. Recognition of antigenic peptides through Class I by CTLs leads to the killing of the target cell, which is infected by virus, intracytoplasmic bacterium, or are otherwise damaged or dysfunctional. Additionally, some helper T cells will present their antigen to B cells, which will activate their proliferation response. 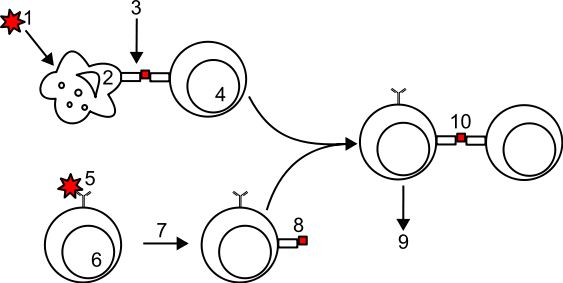 Antigen presentation: In the upper pathway; foreign protein or antigen (1) is taken up by an antigen-presenting cell (2). The antigen is processed and displayed on a MHC II molecule (3), which interacts with a T helper cell (4). In the lower pathway; whole foreign proteins are bound by membrane antibodies (5) and presented to B lymphocytes (6), which process (7) and present antigen on MHC II (8) to a previously activated T helper cell (10), spurring the production of antigen-specific antibodies (9).