B cells mature in the bone marrow, where they undergo VDJ recombination to produce unique receptors that do not react to self-antigens.

B cells are lymphocytes that play a large role in the humoral immune response (as opposed to the cell-mediated immune response, which is governed by T cells). B cells primarily function to make antibodies against antigens, act as antigen-presenting cells (APCs), and eventually develop into memory B cells to provide long-term immunity. B cells undergo clonal selection and develop similarly to T cells with some notable differences.

Immature B cells are produced in the bone marrow of most mammals. Their development occurs through several stages, each representing a change in the genome content at the antibody loci. An antibody is composed of two identical light (L) and two identical heavy (H) chains, and the genes specifying them are found in the V (variable) region and C (constant) region. The heavy-chain V region has three segments, V, D and J. These segments recombine randomly in a process called VDJ recombination to produce a unique variable domain in the immunoglobulin of each individual B cell.

Similar rearrangements occur for the light-chain V region but with only two segments involved: V and J. When the B cell fails in any step of the maturation process, it will die by apoptosis, here called clonal deletion. This is a form of positive selection. B cells are also tested for autoreactivity through negative selection. If these B cells have high affinity for binding to self-antigens, they will die by clonal deletion or another pathway such as anergy.

B cell activation refers to the differentiation and clonal expansion of B cells.When the B cell receptor on the cell surface matches its cognate antigen in the body, the B cell proliferates and secretes a free form of those receptors (antibodies) in the body, with binding sites identical to those on the original cell surface. However, B cell recognition of antigens is not the only element necessary for B cell activation. B cells that have not been exposed to antigen, also known as naïve B cells, can be activated in a T cell-dependent or independent manner. 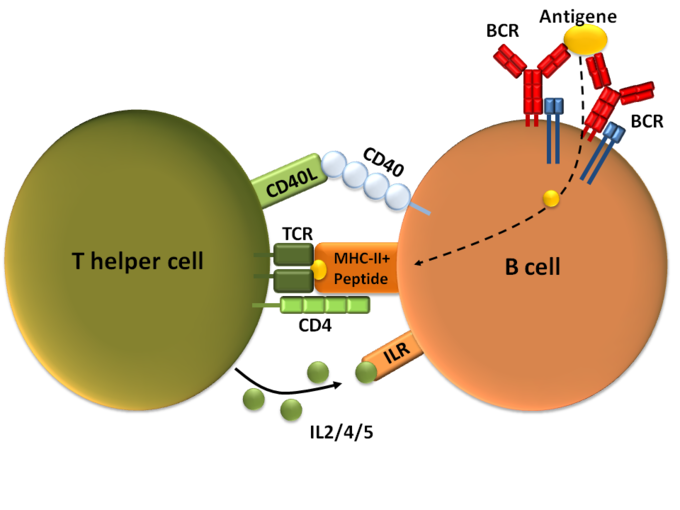 B Cell Differentiation and Clonal Expansion

After activation, the B cell undergoes differentiation and clonal expansion, which usually involves migration to germinal centers if the activation takes place in a lymph node. B cell differentiation is the process by which B cells change into different types, such as plasma cells and plasma blasts. Clonal expansion is the process by which daughter cells arise from a parent cell. During B cell clonal expansion, many copies of that B cell are produced that share affinity with and specificity of the same antigen.

Clonal selection is a theory stating that B cells express antigen-specific receptors before antigens are ever encountered in the body. After B cell activation, the B cells clone themselves through clonal expansion, but during each cellular division, random mutations occur that gradually increase the binding affinity for B cell-produced antibodies to antigens.

For example, memory B cells that differentiate after an adaptive immune response are thought to undergo clonal selection so that antibodies produced by newer memory B cells have considerably higher binding affinities to their antigens. This theory may explain why secondary immune responses from memory cells are so effective that repeated infections by the same pathogen are stopped before symptoms even develop. Following the initial infection, random mutations during clonal selection could produce memory B cells that can more easily bind to antigens than can the original B cells.