The complement system is the ability of antibodies and phagocytic cells to remove pathogens from an organism.

The complement system or “complements” the ability of antibodies and phagocytic cells to clear pathogens from an organism. The complement system consists of a number of small proteins found in the blood, generally synthesized by the liver as a part of the acute phase reaction during systemic inflammation (from TNF-alpha release). When stimulated by one of several triggers, proteases in the system cleave specific proteins to release cytokines and initiate an amplifying cascade of further cleavages. The end result of this activation cascade is massive amplification of the response and activation of the cell-killing membrane attack complex (also called MAC). There are three different pathways by which the complement system may occur.

The classical complement pathway is the main pathway by which the complement system occurs. It is comprised of a cascade of many steps with complement proteins cleaving one another in a sequential order:

Note that C5a has a number of other functions in the immune system, such as causing vasodilation during inflammation and stimulating neutrophil chemotaxis. Additionally, the body’s cells express a glycoprotein called decay accelerating factor, which decays C3 and C5 convertase on the body’s cells. This factor prevents membrane attack complexes from forming on the body’s cells under normal conditions. 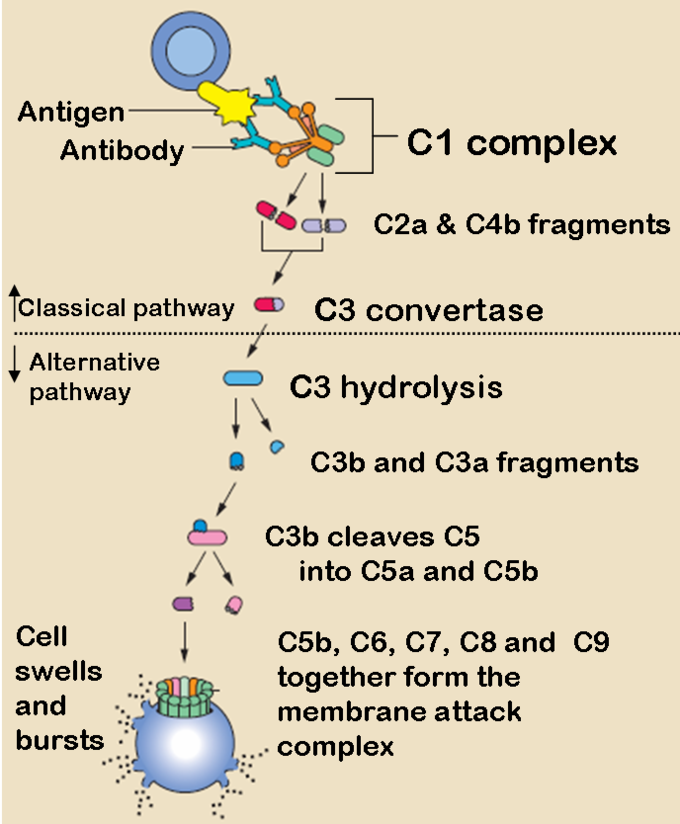 The lectin pathway is not caused by antibody binding, but by a carbohydrate -binding-protein called mannan-binding-lectin (MBL). It is an acute phase reactant produced in the liver and binds to the carbohydrates on the surfaces of many pathogens. The steps for the lectin pathway are:

Problems with the Complement System

The complement system might play a role in diseases with an immune component, such as Barraquer-Simons Syndrome, asthma, lupus erythematosus, glomerulonephritis, various forms of arthritis, autoimmune heart disease, multiple sclerosis, inflammatory bowel disease, ischemia-reperfusion injuries, and rejection of transplanted organs. The complement system is also becoming increasingly implicated in diseases of the central nervous system such as Alzheimer’s disease and other neurodegenerative conditions such as spinal cord injuries. Additionally, deficiencies in complement proteins produced in the liver can lead to a form of primary (congenital) immunodeficiency, in which the body is more susceptible to disease, particularly autoimmune diseases and severe bacterial infections.