Immunological memory refers to the ability of B and T cells to produce long-lived memory cells that defend against specific pathogens.

When B and T cells begin to replicate during an adaptive immune response, some offspring become long-lived memory cells. These memory cells remember all specific pathogens encountered during the animal’s lifetime and can thus call forth a stronger response, called the secondary immune response, if the pathogen ever invades the body again. The adaptive immune system is so-named because it is a result of an adaptation to an infection. Immunological memory can either exist in active long-term memory or passive short-term memory. 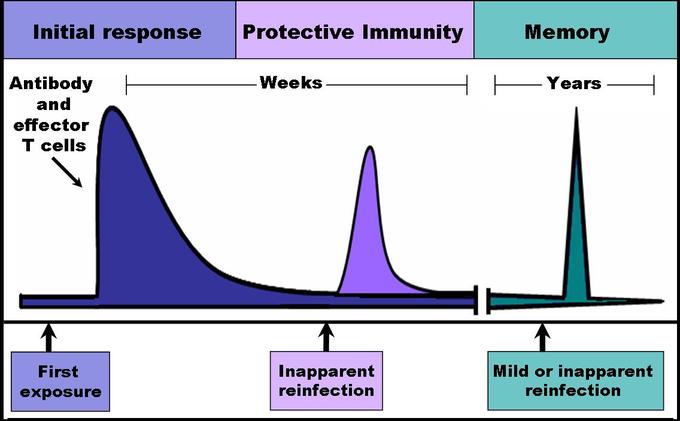 Immune response: When B and T cells begin to replicate, some of the offspring that they produce will end up becoming long-lived memory cells. These memory cells will remember all specific pathogens encountered during the animal’s lifetime and can thus call forth a strong response if the pathogen ever invades the body again.

Newborn infants are particularly vulnerable to infections since they have no prior exposure to pathogens. Thus, the mother protects the infant through several layers of passive protection. During pregnancy, IgG, a certain isotype of antibody, is transported to the baby from the mother through the placenta, so even babies have high levels of antibodies with similar antigen specificities as the mother. Even breast milk contains antibodies that are transferred to the infant’s gastrointestinal tract and protect against bacterial infections until the baby is capable of making its own antibodies. Since the fetus isn’t making any memory cells or antibodies, this is called passive immunity. Passive immunity is short-lived, ranging from a couple days to a couple months.

As the infant matures, their thymus and bone marrow work to raise a stock of mature lymphocytes that form the foundation for the infant’s personal adaptive immune system. Because the passive memory comes from antibodies instead of B cells themselves, infants do not inherit long-term immunological memory from the mother. Even if the infant receives antibodies specific to certain diseases from its mother, the infant wouldn’t be able to bolster a long-term memory that would direct antigen exposure and presentation.

Following an infection, long-term active memory is acquired by activation of B and T cells. Memory cells derive from their parent B and T cells, and undergo clonal selection following infection, which increases antigen-binding affinity. Following reinfection, the secondary immune response typically eliminates the pathogen before symptoms of an infection can occur. During the secondary immune response, memory T cells rapidly proliferate into active helper and cytotoxic T cells specific to that antigen, while memory B cells rapidly produce antibodies to neutralize the pathogen. Long-term active memory consists of rapid response and form permanent immunological memory so long as those memory cells survive.

Vaccinations take advantage of memory lymphocyte development by artificially-generating active immunity, a process called immunization. During a vaccination, the antigen of a pathogen is introduced into the body and stimulates the immune system to develop a specific immunity against that pathogen. It doesn’t cause the disease that the pathogen brings because the vaccine uses an attenuated form of the pathogen that contains the same antigen but doesn’t have the capacity for replication. This deliberate introduction of the pathogen is successful since it exploits the immune system’s natural specificity and inducibility. Vaccination is an extremely effective manipulation of the immune system that helps fight diseases. Over the course of vaccine development, they have saved countless lives, and diseases like rubella and polio are not the widespread causes of disability they once were.

Despite the effectiveness of vaccines, methods do not yet exist to develop vaccines for every pathogen. Many pathogens undergo mutations that change the expression of their antigens, making immunization attempts fruitless for diseases like the common cold or norovirus. Many parasitic pathogens, such as the plasmodium protist that causes malaria, haven’t successfully been vaccinated against because it is challenging to develop a vaccine that is strong enough to stimulate an immune response (sufficient immunogenicity) without causing a live infection.