The Purpose of Breathing

Breathing is the physiological process that moves air in and out of the lungs in terrestrial vertebrates. Respiration is often referred to as breathing, but it can also mean cellular respiration, which is the main reason why breathing is important.

Cells require oxygen from the air to extract energy from glucose through respiration, which produces carbon dioxide and water as a waste product. Therefore, oxygen is vital for every part of normal cellular function, and oxygen deficiency can have severe pathological consequences.

The respiratory system facilitates breathing. In the alveoli tissue of the lungs, the exchange of oxygen and carbon dioxide molecules between the air and the bloodstream occurs by passive transport, so that oxygen is taken in and carbon dioxide and water are removed.

Passive diffusion (also called bulk flow) is the term for the movement of these gases between the air and bloodstream based on their relative concentration, with the gas with the greater concentration moving across to the area with the lower concentration. This process consumes no energy.

The circulatory system is deeply connected with the respiratory system because it distributes the dissolved oxygen to the tissues of the body and the waste carbon dioxide to the lungs.

Another key role of respiration is maintaining proper blood pH. The concentration of hydrogen ions in blood is partially determined by the amount of dissolved carbon dioxide in the blood, so that more carbon dioxide results in more hydrogen, causing the blood to have a lower pH and be more acidic.

When the blood becomes acidic, respiratory acidosis occurs, which can cause tissue damage if too severe. Acidosis can be caused by hypoventilation (too little breathing), which reduces the removal rate of carbon dioxide, causing it to build up in the bloodstream along with hydrogen. There are many symptoms of acidosis, such as headache, confusion, increased heart rate, and muscle weakness.

Respiratory alkalosis happens when the opposite effect occurs. When the blood pH becomes too high, from too few hydrogen ions because of too little carbon dioxide, the blood will become alkaline, which is also harmful to the body. Alkalosis can happen from hyperventilation (too much breathing) which removes too much carbon dioxide from the bloodstream. 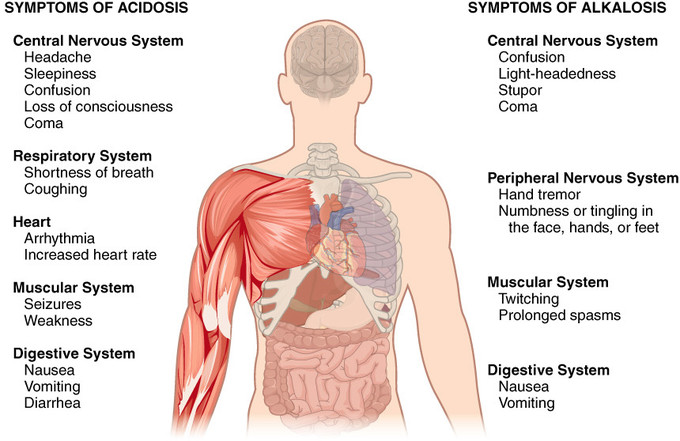 Some Symptoms of Acidosis and Alkalosis: One of the primary reasons for breathing is to regulate blood pH so that respiratory acidosis and alkalosis don’t occur.