Lung capacity generally refers to the total amount of air inside the lungs at certain phases of the respiratory cycle. It is usually measured as the amount of air that is exhaled after inhalation; this is measured with a device called a spirometer.

There are many different types and terms for the different components of lung capacity that all have different characteristics. In general, measuring lung capacity is important because it serves as the best indicator of lung health by quantifying the functional ability of the lungs to cycle air.

Vital capacity (VC) is the maximum amount of air that a person can exhale after inhaling as much air as possible. It is also the sum of tidal volume and the inspiratory and expiratory reserve volumes, which capture the differences between normal breathing and maximal breathing.

The inspiratory reserve volume is the extra space for air after a normal inspiration, and the expiratory reserve volume is the extra air that can be exhalaed after a normal expiration. VC tends to be decreased in those with restrictive lung diseases, such as pulmonary fibrosis, making VC a good diagnostic indicator of restrictive lung diseases.

The most widely used diagnostic application for lung capacities is the ratio between forced expiratory volume (FEV1) and forced vital capacity (FVC).

The FEV1/FVC ratio is an important indicator of lung health and is the standard approach for diagnosing COPD (chronic pulmonary obstructive disease), which includes emphysema and bronchitis, which are both caused by smoking. An FEV1/FVC ratio that is greater than .8 indicates a normal lung with generally healthy function, however a ratio below .8 indicates a significant degree of airway obstruction and suggests COPD. 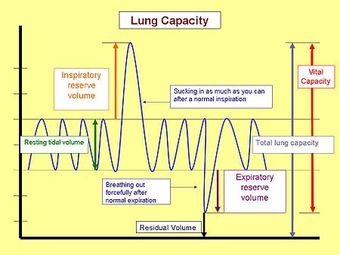 Lung Capacity: Lung capacity at the various stages of the respiratory cycle, which is one inhalation followed by an exhalation.

The obstruction becomes worse the lower the ratio becomes, which increases the likelihood of respiratory failure and death. The FEV1/FVC ratio naturally falls as humans age, however smoking (the cause of COPD) will cause much larger decreases in FEV1/FVC ratio than what is normal.

Smoking causes this damage by initiating an inflammatory response in the lungs. Those who quit smoking will not experience a regain the FEV1/FVC ratio lost from smoking, however their rate of FEV1/FVC ratio decline will slow to normal, and their life expectancy will be less impacted.

Those with asthma, an acute form obstructive lung disease, will show a low FEV1/FVC ratio during an asthma attack, which returns to normal after the attack is over. Therefore, to diagnose asthma, many clinicians expose patients to methacholine or histamine to trigger mild asthma attacks to measure FEV1/FVC ratios.