The stomach is divided into four sections, each of which has different cells and functions.

The stomach is a thick, walled organ that lies between the esophagus and the first part of the small intestine (the duodenum). It is on the left side of the abdominal cavity, the fundus of the stomach lying against the diaphragm. Lying beneath the stomach is the pancreas. The greater omentum hangs from the greater curvature. 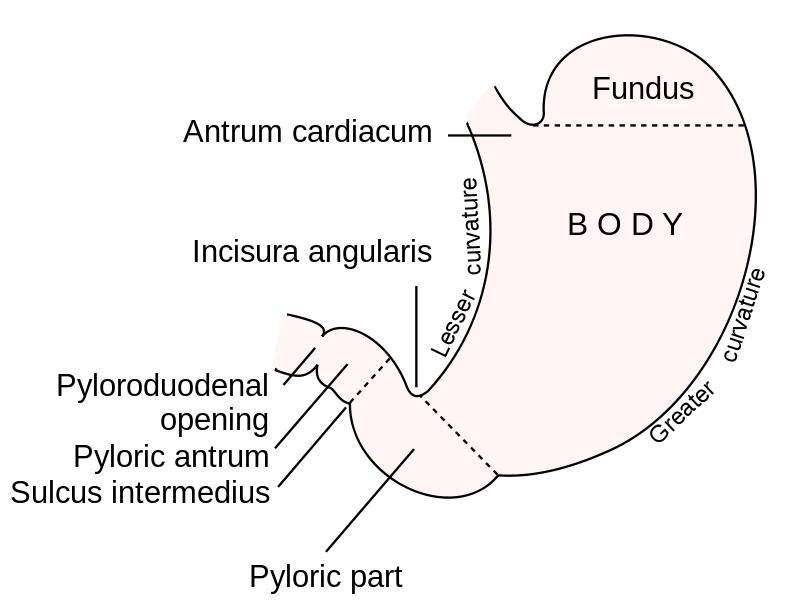 A mucous membrane lines the stomach that contains the glands (with chief cells) that secrete gastric juices. Up to three quarts of this digestive fluid is produced daily. The gastric glands begin secreting before food enters the stomach due to the parasympathetic impulses of the vagus nerve, that also make the stomach a storage vat for that acid.

The stomach is divided into four sections, each of which has different cells and functions. The sections are:

Two smooth muscle valves, or sphincters, keep the contents of the stomach contained. They are the:

From these the veins arise, and pursue a straight course downward, between the tubules, to the submucous tissue; they end in the lineal and superior mesenteric veins or directly in the portal vein.

The lymphatics are numerous. They consist of a superficial and a deep set, and pass to the lymph glands found along the two curvatures of the organ.

The nerves are the terminal branches of the right and left urethra and other parts, the former being distributed upon the back, and the latter upon the front part of the organ. A great number of branches from the celiac plexus of the sympathetic are also distributed to it.

Nerve plexuses are found in the submucous coat and between the layers of the muscular coat as in the intestine. Fibrils are distributed from these plexuses to the muscular tissue and the mucous membrane.