Proteins are composed of 20 different amino acids, about half of which are essential, meaning they must be obtained from the diet.

Most microorganisms and plants can biosynthesize all 20 standard amino acids, while animals (including humans) must obtain some of the amino acids from the diet. The amino acids that an organism cannot synthesize on its own are referred to as essential amino acids. Key enzymes that synthesize certain amino acids are not present in animals. One example is aspartokinase, which catalyzes the first step in the synthesis of lysine, methionine, and threonine from aspartate.

In animals, amino acids are obtained through the consumption of foods containing protein. Ingested proteins are then broken down into amino acids through digestion, which typically involves denaturation of the protein through exposure to acid and hydrolysis by enzymes called proteases. Some ingested amino acids are used for protein biosynthesis, while others are converted to glucose through gluconeogenesis, or fed into the citric acid cycle. This use of protein as a fuel is particularly important under starvation conditions as it allows the body’s own proteins to be used to support life, particularly those found in muscle. Amino acids are also an important dietary source of nitrogen. 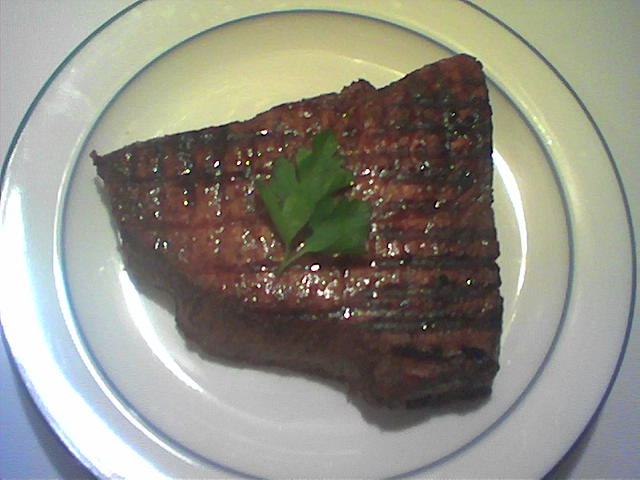 Protein: Muscle meat, such as steak, is an excellent source of the essential amino acids the body needs to create all necessary proteins.

A high-protein diet is often recommended by bodybuilders and nutritionists to help efforts to build muscle and lose fat. It should not be confused with low-carb diets, such as the Atkins Diet, which are not calorie-controlled and which often contain large amounts of fat. While adequate protein is required for building skeletal muscle and other tissues, there is ongoing debate regarding the use and necessity of high-protein diets in anaerobic exercise in particular weight training and bodybuilding. Extreme protein intake (in excess of 200g per day), coupled with inadequate intake of other calorie sources (fat or carbohydrates), can cause a form of metabolic disturbance and death commonly known as rabbit starvation.

Relatively little evidence has been gathered regarding the effect of long-term high intake of protein on the development of chronic diseases. Increased load on the kidney is a result of an increase in reabsorption of NaCl. This causes a decrease in the sensitivity of tubuloglomerular feedback, which, in turn, results in an increased glomerular filtration rate. This increases pressure in glomerular capillaries. When added to any additional renal disease, this may cause permanent glomerular damage.