When the gastrointestinal tract is full, anabolism exceeds catabolism; this is the absorptive state.

The baby who has finished nursing has a full tummy and now will probably fall asleep. During this sleep period, anabolic processes are busy building up stores of fats and glycogen that will be needed in the future to provide energy for the growing baby.

Absorptive state is the period in which the gastrointestinal tract is full and the anabolic processes exceed catabolism. The fuel used for this process is glucose.

Simple sugars are sent to the liver where they are converted to glucose. The glucose then travels to the blood or is converted to glycogen and fat (triglyceride) for energy storage. The glycogen and fat will be stored in the liver and adipose tissue, respectively, as reserves for the post-absorptive state. The remaining glucose is taken in for use by body cells or stored in skeletal muscle as glycogen.

Chylomicrons are lipoprotein particles that consist of triglycerides (85-92%), phospholipids (6-12%), cholesterol (1-3%) and proteins (1–2%). This main product of fat digestion is first broken down to fatty acids and glycerol through hydrolysis using lipoprotein lipase. This allows them to pass freely through capillary walls. Most of this will be reconstituted as triglycerides and stored in adipose tissue. The rest will be used for energy in adipose cells, skeletal muscle and hepatocytes. In a low carb environment, other cells of the body will also begin to use triglycerides as energy sources.

The liver deaminates amino acids to keto acids to be used in the Kreb’s cycle in order to generate energy in the form of ATP. They may also be converted to fat for energy storage. Some are used to make plasma proteins, but most leave through liver sinusoids to be used by body cells to construct proteins. 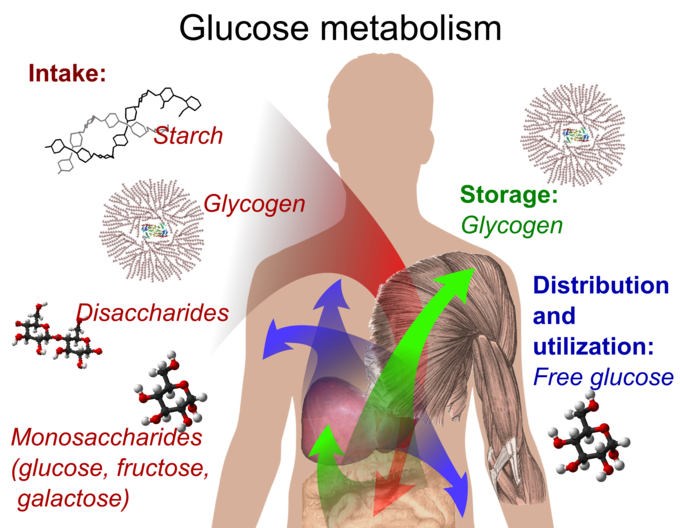 Glucose Metabolism: Glucose metabolism and various forms of it in the process.