Tubular reabsorption is the process by which solutes and water are removed from the tubular fluid and transported into the blood.

The fluid filtered from blood, called filtrate, passes through the nephron, much of the filtrate and its contents are reabsorbed into the body. Reabsorption is a finely tuned process that is altered to maintain homeostasis of blood volume, blood pressure, plasma osmolarity, and blood pH. Reabsorbed fluids, ions, and molecules are returned to the bloodstream through the peri-tubular capillaries, and are not excreted as urine. 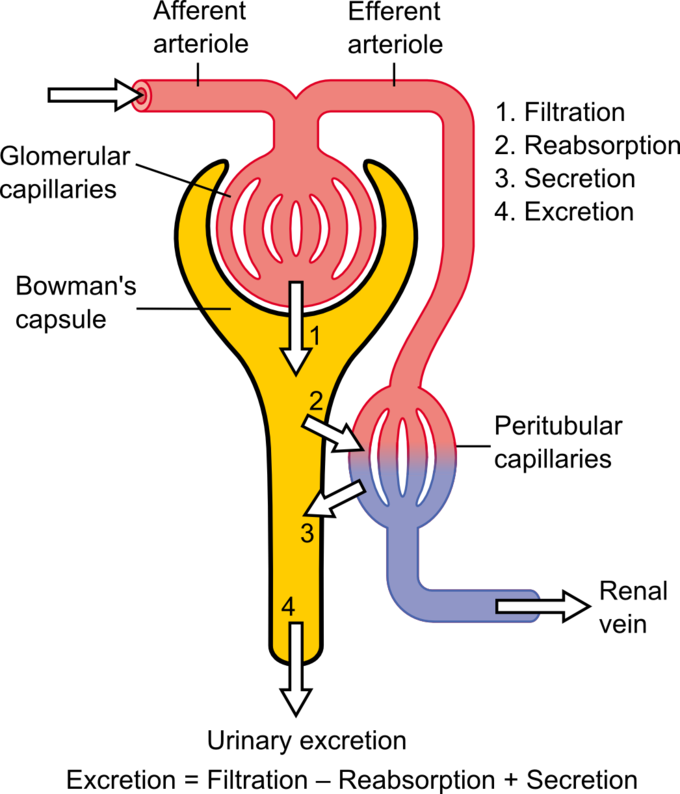 Reabsorption in the nephron may be either a passive or active process, and the specific permeability of the each part of the nephron varies considerably in terms of the amount and type of substance reabsorbed. The mechanisms of reabsorption into the peri-tubular capillaries include:

These processes involve the substance passing though the luminal barrier and the basolateral membrane, two plasma membranes of the kidney epithelial cells, and into the peri-tubular capillaries on the other side. Some substances can also pass through tiny spaces in between the renal epithelial cells, called tight junctions.

As filtrate passes through the nephron, its osmolarity (ion concentration) changes as ions and water are reabsorbed. The filtrate entering the proximal convoluted tubule is 300 mOsm/L, which is the same osmolarity as normal plasma osmolarity.

In the proximal convoluted tubules, all the glucose in the filtrate is reabsorbed, along with an equal concentration of ions and water (through cotransport), so that the filtrate is still 300 mOsm/L as it leaves the tubule. The filtrate osmolarity drops to 1200 mOsm/L as water leaves through the descending loop of Henle, which is impermeable to ions. In the ascending loop of Henle, which is permeable to ions but not water, osmolarity falls to 100–200 mOsm/L.

Finally, in the distal convoluted tubule and collecting duct, a variable amount of ions and water are reabsorbed depending on hormonal stimulus. The final osmolarity of urine is therefore dependent on whether or not the final collecting tubules and ducts are permeable to water or not, which is regulated by homeostasis. 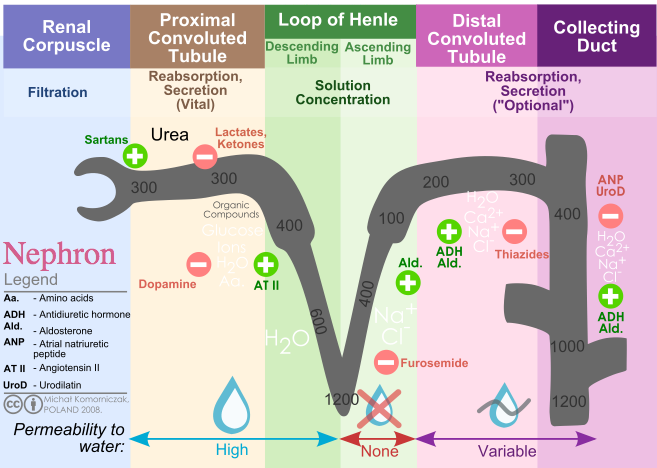