Antidiuretic hormone (ADH) is produced by the pituitary gland to control the amount of water that is reabsorbed through the collecting ducts.

Urine is produced not only to eliminate many cellular waste products, but also to control the amount of water in the body. In a way, urine volume regulation is part of homeostasis, in that it directly regulates blood volume, because greater amounts of urine will reduce the volume of waters in blood.

There are a few complex systems involved in regulating blood volume and urine production, such as the intricate renin–angiotensin system, and the simpler anti-diuretic hormone (ADH) feedback system.

An anti-diruetic is a substance that decreases urine volume, and ADH is the primary example of it within the body. ADH is a hormone secreted from the posterior pituitary gland in response to increased plasma osmolarity (i.e., increased ion concentration in the blood), which is generally due to an increased concentration of ions relative to the volume of plasma, or decreased plasma volume.

The increased plasma osmolarity is sensed by osmoreceptors in the hypothalamus, which will stimulate the posterior pituitary gland to release ADH. ADH will then act on the nephrons of the kidneys to cause a decrease in plasma osmolarity and an increase in urine osmolarity.

ADH increases the permeability to water of the distal convoluted tubule and collecting duct, which are normally impermeable to water. This effect causes increased water reabsorption and retention and decreases the volume of urine produced relative to its ion content.

After ADH acts on the nephron to decrease plasma osmolarity (and leads to increased blood volume) and increase urine osmolarity, the osmoreceptors in the hypothalamus will inactivate, and ADH secretion will end. Due to this response, ADH secretion is considered to be a form of negative feedback.

A diuretic is any substance that has the opposite effect of ADH— they increase urine volume, decrease urine osmolarity, lead to an increased plasma osmolarity, and often reduced blood volume. Many substances can act as diuretics, albeit with different mechanisms.

A common example is alcohol and water ingestion, which directly inhibit ADH secretion in the pituitary gland. Alternatively caffeine is a diuretic because it interferes with sodium reabsorption (reducing the amount of water reabsorbed by sodium cotransport) and increases the glomerular filtration rate by temporarily increasing blood pressure. Many medications are diuretics because they inhibit the ATPase pumps, thus slowing water reabsorption further. 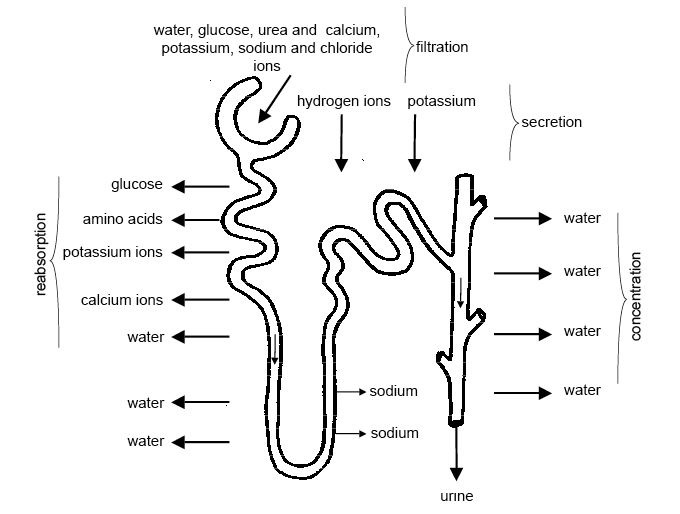 Summary of the process of urine formation: As the fluid flows along the proximal convoluted tubule useful substances like glucose, water, salts, potassium ions, calcium ions, and amino acids are reabsorbed into the blood capillaries that form a network around the tubules. Many of these substances are transported by active transport and energy is required.