Clearance is a measurement of the renal excretion ability.

In renal physiology, clearance is a measurement of the renal excretion ability, which measures the amount of plasma from which a substance is removed from the body over an interval of time. Each substance has its own specific clearance that depends on its unique filtration characteristics. 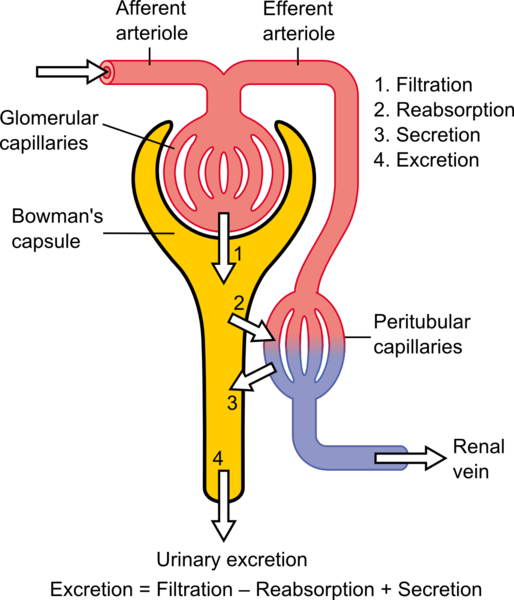 Physiology of the nephron: Diagram showing the basic physiologic mechanisms of the kidney.

Renal clearance depends mainly on GFR, tubular absorption, and tubular secretion. If any of those variables change, the renal clearance rate of a substance will change as well. These variables alter clearance through the following rules:

Additionally, the characteristics of the substance of interest will also determine some components of clearance. For example, certain pharmaceuticals have the tendency to bind to plasma proteins or exist unbound in plasma. Only those that are unbound will be filtered and cleared from the body. Size and molecular structure will also alter the clearance rate.

It is also important to note that renal clearance is not the only form of clearance that occurs for the substances within the plasma of the body. The other types of clearance are

These types of clearance may also excrete certain molecules from the bloodstream based on their size and molecular structure; however, these forms of clearance are generally relatively minor compared to renal clearance.

These types of clearance all add up to a summation known as total body clearance, which refers to the removal of a substance from the plasma over time, incorporating all routes of removal in the body.