Fluid can enter the body as preformed water, ingested food and drink, and, to a lesser extent, as metabolic water.

Fluid can enter the body as preformed water, ingested food and drink, and, to a lesser extent, as metabolic water that is produced as a by-product of aerobic respiration and dehydration synthesis. A constant supply is needed to replenish the fluids lost through normal physiological activities, such as respiration, sweating, and urination.

Water generated from the biochemical metabolism of nutrients provides a significant proportion of the daily water requirements for some arthropods and desert animals, but it provides only a small fraction of a human’s necessary intake. In the normal resting state, the input of water through ingested fluids is approximately 2500 ml/day.

Body water homeostasis is regulated mainly through ingested fluids, which, in turn, depends on thirst. Thirst is the basic instinct or urge that drives an organism to ingest water.

Thirst is a sensation created by the hypothalamus, the thirst center of the human body. Thirst is an important component of blood volume regulation, which is slowly regulated by homeostasis.

An osmoreceptor is a sensory receptor that detects changes in osmotic pressure and is primarily found in the hypothalamus of most homeothermic organisms. Osmoreceptors detect changes in plasma osmolarity (that is, the concentration of solutes dissolved in the blood).

When the osmolarity of blood changes (it is more or less dilute), water diffusion into and out of the osmoreceptor cells changes. That is, the cells expand when the blood plasma is more dilute and contract with a higher concentration.

When the osmoreceptors detect high plasma osmolarity (often a sign of a low blood volume), they send signals to the hypothalamus, which creates the biological sensation of thirst. Osmoreceptors also stimulate vasopressin (ADH) secretion, which starts the events that will reduce plasma osmolarity to normal levels. 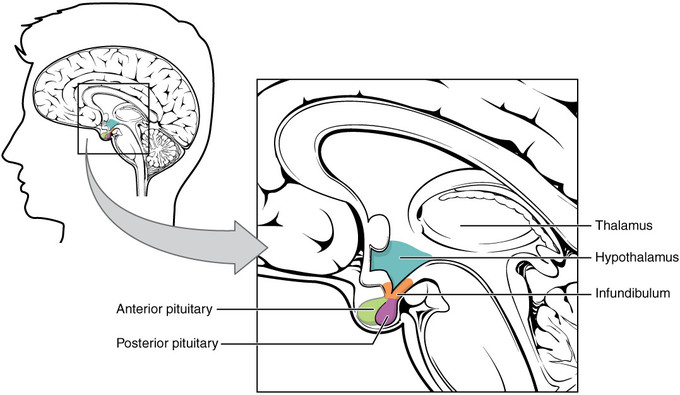 The macula densa cells in the walls of the ascending loop of Henle of the nephron is another type of osmoreceptor; however it stimulates the juxtaglomerular apparatus (JGA) instead of the hypothalamus. When the macula densa is stimulated by high osmolarity, The JGA releases renin into the bloodstream, which cleaves angiotensinogen into angiotensin I. Angiotensin I is converted into angiotensin II by ACE in the lungs. ACE is a hormone that has many functions.

Angiotensin II acts on the hypothalamus to cause the sensation of thirst. It also causes vasoconstriction, and the release of aldosterone to cause increased water reabsorption in a mechanism that is very similar to that of ADH.