Sodium is an important cation that is distributed primarily outside the cell.

Sodium is an important cation that is distributed primarily outside the cell. The cell sodium concentration is about 15 mmol/l, but it varies in different organs; it has an intracellular volume of 30 liters and about 400 mmol are inside the cell.

The plasma and interstitial sodium is about 140 mmol/l with an extracellular volume of about 13 liters, 1,800 mmol are in the extracellular space. The total body sodium, however, is about 3,700 mmol as there is about 1,500 mmol stored in bones.

The body has potent sodium-retaining mechanisms and even if a person is on five mmol Na+/day they can maintain sodium balance. Extra sodium is lost from the body by reducing the activity of the renin –angiotensin system that leads to increased sodium loss from the body. Sodium is lost through the kidneys, sweat, and feces. 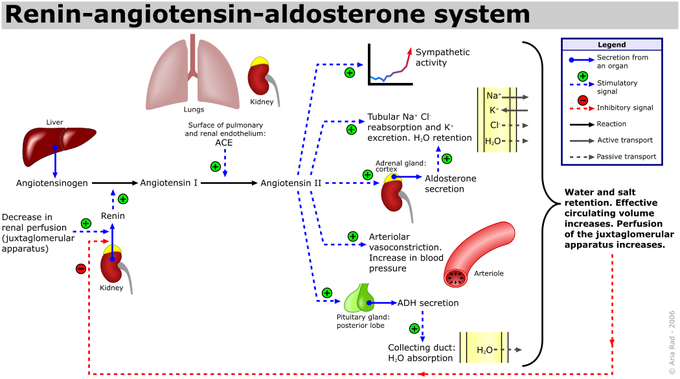 Aldosterone also acts on the sweat ducts and colonic epithelium to conserve sodium. When aldosterone is activated to retain sodium the plasma sodium tends to rise. This immediately causes the release of ADH, which causes water to be retained, thus balancing Na+ and H2O in the right proportion to restore plasma volume.

In addition to aldosterone and angiotensin II, other factors influence sodium excretion.