Testes ducts, which include the seminiferous tubules and vas deferens, are involved in the creation or transportation of sperm. 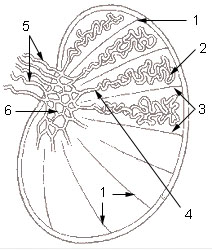 Seminiferous tubules, located in the testes, are where meiosis occurs and the gametes (spermatozoa) are created. The seminiferous tubules are formed from primitive sex cords from the gonadal ridge. The epithelium of the tubule consists of tall, columnar cells called Sertoli cells. Between the Sertoli cells are spermatogenic cells, which differentiate through meiosis to become sperm cells. There are two types of seminiferous tubules: convoluted, located toward the lateral side, and straight, as the tubule comes medially to form ducts that will exit the testis.

The efferent ducts connect the rete testis with the initial section of the epididymis. There are two basic types of efferent ductule structure.

The ductuli are unilaminar and composed of columnar ciliated and nonciliated (absorptive) cells. The ciliated cells stir the luminal fluids, which may help ensure homogeneous absorption of water from the fluid produced by the testis. This results in an increase in the concentration of luminal sperm. The epithelium is surrounded by a band of smooth muscle that helps to propel the sperm toward the epididymis. 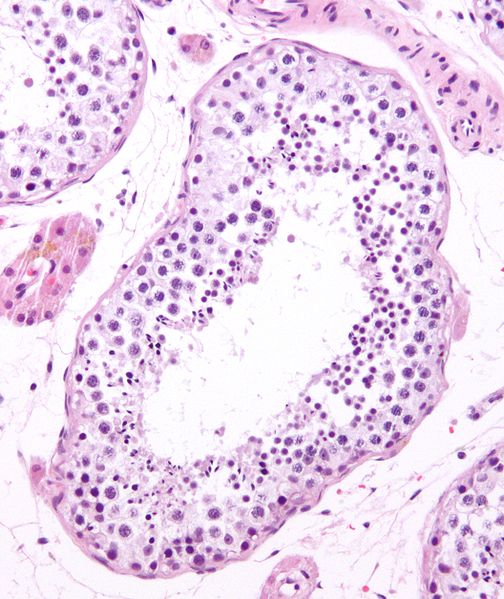 The smooth muscle layer of the vas deferens contracts in waves of peristalsis during ejaculation. Two ducts connect the left and right epididymis to the ejaculatory ducts in order to move sperm. In humans, each tube is about 30 centimeters (a foot) long,
3 to 5 mm in diameter, and surrounded by smooth muscle. The sperm are transferred from the vas deferens into the urethra, collecting secretions from the male accessory sex glands such as the seminal vesicles, prostate gland, and bulbourethral glands, which provide the bulk of semen.

The procedure of deferentectomy, also known as a vasectomy, is a method of contraception in which the vas deferens are permanently cut, though in some cases it can be reversed. A modern procedure that does not include cutting the ducts involves injecting an obstructive material into the ductus to block the flow of sperm. Research in male contraception has focused primarily on the vas deferens with the use of the intra-vas device and reversible inhibition of sperm under guidance.