The male reproductive system is regulated by the production, stimulation, and feedback of specific hormones.

Differentiate among the hormones of the male reproductive system

The Role of Hormones in Male Reproduction

Studies from rodent models suggest that gonadotropin hormones (both LH and FSH) support the process of spermatogenesis by suppressing the proapoptotic signals and thus promoting spermatogenic cell survival. The Sertoli cells themselves mediate parts of spermatogenesis through hormone production. They are capable of producing the hormones estradiol and inhibin. The Leydig cells are also capable of producing estradiol in addition to their main product, testosterone.

Gonadotropin-releasing hormone (GnRH) is mainly made in the preoptic area of the hypothalamus before traveling to the pituitary gland. There it stimulates the synthesis and secretion of the gonadotropins, FSH and luteinizing hormone (LH).

Follicle-stimulating hormone (FSH) is released by the anterior pituitary gland. Its presence in males is necessary for the maturation of spermatozoa. Follicle-stimulating hormone stimulates both the production of androgen-binding protein by Sertoli cells and the formation of the blood-testis barrier. Increasing the levels of FSH increases the production of spermatozoa by preventing the apoptosis of type A spermatogonia.

Luteinizing hormone (LH) is released by the anterior pituitary gland. In the testes, LH binds to receptors on Leydig cells, which stimulates the synthesis and secretion of testosterone.

Inhibin is secreted by the Sertoli cells and acts to decrease the levels of FSH. The hormone is released into the circulation when the sperm count is too high. 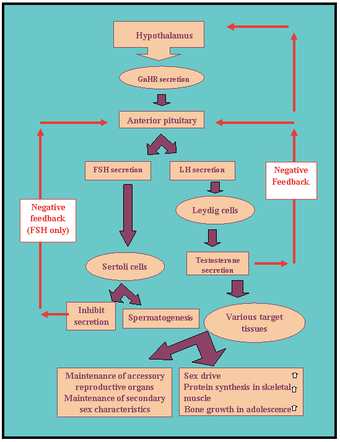