The ovaries are the ovum-producing organs of the internal female reproductive system.

The ovary is an ovum-producing reproductive organ, typically found in pairs as part of the vertebrate female reproductive system. Ovaries in females are analogous to testes in males in that both are gonads and endocrine glands. Ovaries secrete both estrogen and progesterone. Estrogen is responsible for the appearance of secondary sex characteristics of females at puberty and for the maturation and maintenance of the reproductive organs in their mature functional state. Progesterone functions with estrogen by promoting menstrual cycle changes in the endometrium.

The ovaries are located in the lateral wall of each side of the pelvis in a region called the ovarian fossa. The fossa usually lies beneath the external iliac artery and in front of the ureter and internal iliac artery.

In humans, the paired ovaries lie within the pelvic cavity on either side of the uterus, to which they are attached via a fibrous cord called the ovarian ligament. The ovaries are tethered to the body wall via the suspensory ligament of the ovary. The part of the broad ligament of the uterus that covers the ovary is known as the mesovarium. The ovary is the only organ in the human body which is totally invaginated into the peritonium, making it the only intraperitoneal organ. 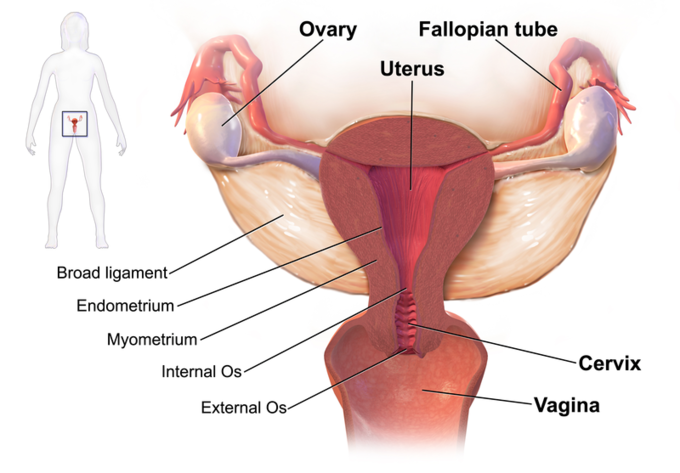 Ovary: A pictorial illustration of the female reproductive system

The ovaries are the site of egg cell production and also have specific endocrine function.

The ovaries are the site of gamete (egg cell, oocyte) production. The developing egg cell (or oocyte) grows within the environment provided by ovarian follicles. Follicles are composed of different types and number of cells according to their maturation stage, which can be determined by their size. When oocyte maturation is completed, a luteinizing hormone ( LH ) surge secreted by the pituitary gland stimulates follicle rupture and oocyte release.

This oocyte development and release process is referred to as ovulation. The follicle remains functional and transforms into a corpus luteum, which secretes progesterone to prepare the uterus for possible embryo implantation. Usually each ovary takes turns releasing eggs each month. However, this alternating egg release is random. When one ovary is absent or dysfunctional, the other ovary will continue to release eggs each month.

Ovaries secrete estrogen, progesterone, and testosterone. Estrogen is responsible for the secondary sex characteristics of females at puberty. It is also crucial for the maturation and maintenance of the mature and functional reproductive organs. Progesterone prepares the uterus for pregnancy and the mammary glands for lactation. The co-actions of progesterone and estrogen promote menstrual cycle changes in the endometrium. In women, testosterone is important for the development of muscle mass, muscle and bone strength, and for optimal energy level. It also has a role in libido in women.