The vagina is the female reproductive tract and has two primary functions: sexual intercourse and childbirth.

Describe the vagina and its functions

The vagina, a female sex organ, is a fibromuscular tubular tract that has two main functions: sexual intercourse and childbirth. In humans, this passage leads from the opening of the vulva to the uterus, but the vaginal tract ends at the cervix.

Anatomy of the Vagina 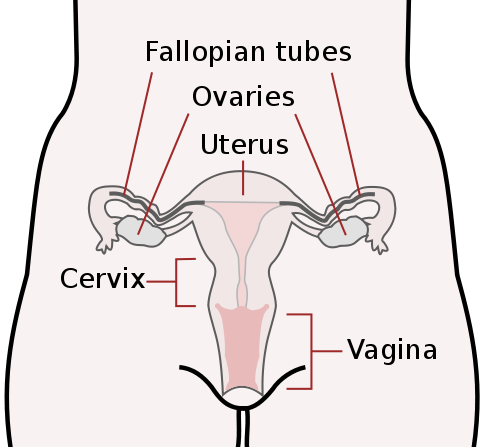 Vagina: The vagina is the most immediate internal female reproductive organ. This diagram also indicates the ovaries, uterus, and cervix.

The vaginal opening is much larger than the urethral opening. During arousal, the vagina gets moist to facilitate the entrance of the penis. The inner texture of the vagina creates friction for the penis during intercourse.

The vaginal opening is at the caudal end of the vulva behind the opening of the urethra. The upper quarter of the vagina is separated from the rectum by the rectouterine pouch. The vagina and the inside of the vulva are a reddish-pink color, as are most healthy internal mucous membranes in mammals. A series of ridges produced by the folding of the wall of the outer third of the vagina is called the vaginal rugae. These transverse epithelial ridges and provide the vagina with increased surface area for extension and stretching.

Vaginal lubrication is provided by the Bartholin’s glands near the vaginal opening and the cervix. The membrane of the vaginal wall also produces moisture, although it does not contain any glands. Before and during ovulation, the cervix’s mucus glands secrete different variations of mucus, which provides an alkaline environment in the vaginal canal that is favorable to the survival of sperm.

The hymen is a membrane of tissue that surrounds or partially covers the external vaginal opening. The tissue may or may not be ruptured by vaginal penetration. It can also be ruptured by childbirth, a pelvic examination, injury, or sports. The absence of a hymen may not indicate prior sexual activity. Similarly, its presence may not indicate a lack of prior sexual activity.

Function of the Vagina

The vagina’s primary functions are sexual arousal and intercourse as well as childbirth.

The concentration of the nerve endings close to the entrance of a woman’s vagina (the lower third) can provide pleasurable sensation during sexual activity when stimulated. Ninety percent of the vagina’s nerve endings are in this area. However, the vagina as a whole has insufficient nerve endings for sexual stimulation and orgasm; this lack of nerve endings makes childbirth significantly less painful.

Research indicates that clitoral tissue extends considerably into the vulva and vagina. During sexual arousal, and particularly clitoral stimulation, the vaginal walls lubricate to reduce friction caused by sexual activity. With arousal, the vagina lengthens rapidly to an average of about 4 in. (10 cm), and can continue to lengthen in response to pressure. As the woman becomes fully aroused, the vagina tents (expands in length and width), while the cervix retracts. The walls of the vagina are composed of soft elastic folds of mucous membrane which stretch or contract (with support from pelvic muscles) to the size of the inserted penis or other object, stimulating the penis and helping the male to experience orgasm and ejaculation, thus enabling fertilization.

An erogenous zone commonly referred to as the G-Spot (also known as the Gräfenberg Spot) is located at the anterior wall of the vagina, about five centimeters in from the entrance. Some women experience intense pleasure if the G-Spot is stimulated appropriately during sexual activity. A G-Spot orgasm may be responsible for female ejaculation, leading some doctors and researchers to believe that G-Spot pleasure comes from the Skene’s glands, a female homologue of the prostate, rather than any particular spot on the vaginal wall. Other researchers consider the connection between the Skene’s glands and the G-Spot to be weak. They contend that the Skene’s glands do not appear to have receptors for touch stimulation and that there is no direct evidence for their involvement. The G-Spot’s existence as a distinct structure, is still under dispute, as its location can vary from woman to woman and is sometimes nonexistent.

The Vagina and Childbirth

The vagina provides the channel to deliver the baby from the uterus to its independent life outside the mother’s body. During birth, the elasticity of the vagina allows it to stretch to many times its normal diameter. The vagina is often referred to as the birth canal in the context of pregnancy and childbirth.