Oogenesis is the maturation of the female gametes through meiotic division.

The menstrual cycle begins with the maturation of oocytes through the process of oogenesis, as well as concurrent follicle development that stimulates ovulation. Oogenesis starts with the process of developing oogonia via the transformation of primordial follicles into primary oocytes, a process called oocytogenesis. Oocytogenesis is complete either before or shortly after birth in humans. During the menstrual cycle primary oocytes complete maturation through further meiotic divisions.

By around day 9 of the menstrual cycle, only one healthy secondary follicle remain. The rest are reabsorbed into the ovary. The remaining follicle, called the dominant follicle, is responsible for producing large amounts of estrogen during the late follicular phase.

On day 14 of the cycle, a luteinizing hormone surge is triggered by the positive feedback of estrogen. This causes the secondary follicle to develop into a tertiary follicle, which then leaves the ovary 24–36 hours later. An important event in the development of the tertiary follicle occurs when the primary oocyte completes the first meiotic division, resulting in the formation of a polar body and a secondary oocyte. The empty follicle then forms a corpus luteum which later releases progesterone to maintain a potential pregnancy.

Immediately after meiosis I, the haploid secondary oocyte initiates meiosis II. However, this process is also halted at the metaphase II stage until fertilization occurs. When meiosis II has completed, an ootid and another polar body is created.

Both polar bodies disintegrate at the end of meiosis II, leaving only the ootid, which eventually develops into a mature ovum. The formation of polar bodies serves to discard the extra haploid sets of chromosomes that have resulted as a consequence of meiosis. 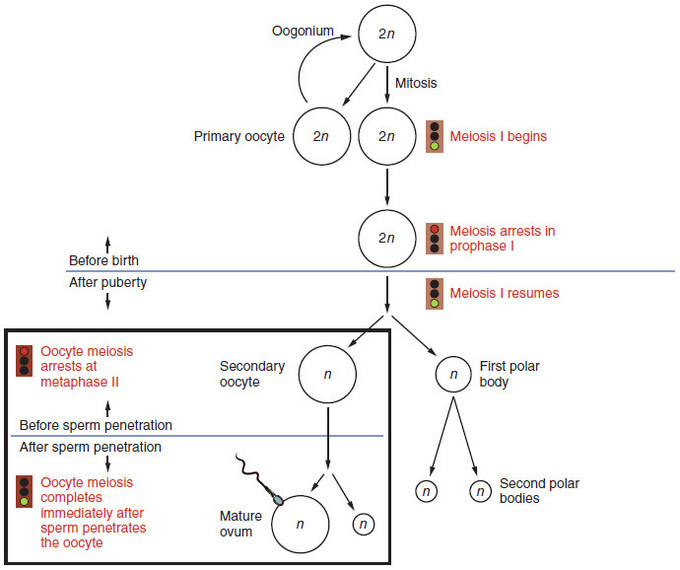 The Oogenesis Process: Diagram showing maturation of the ovum.