Estrogen and progesterone have several effects beyond their immediate roles in the menstrual cycle, pregnancy, and labor.

Both estrogens and progesterone serve functions in the body beyond their roles in menstruation, pregnancy, and childbirth. 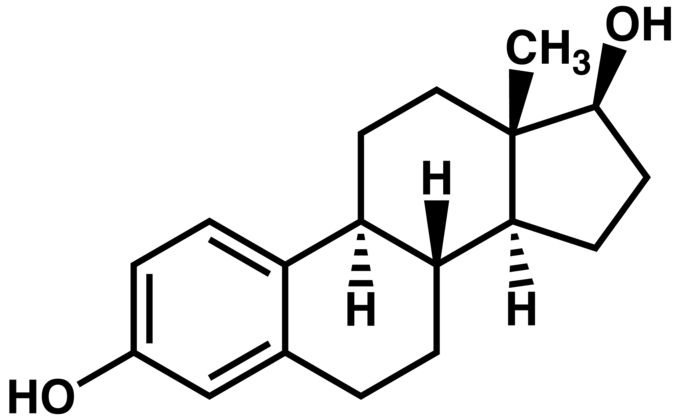 Estradiol: One of the estrogens produced in the human body, predominant during a woman’s reproductive years.

Estrogens are a group of compounds named for their importance in the estrous cycle of humans and other animals. They are the primary female sex hormones, although they are found in males as well. The three major naturally occurring forms of estrogen in women are estrone (E1), estradiol (E2), and estriol (E3). Estetrol (E4) is produced only during pregnancy.

Natural estrogens are steroid hormones, while some synthetic versions are non-steroidal. Estrogens are synthesized in all vertebrates as well as some insects, and their presence in both suggests that they have an ancient evolutionary history. Like all steroid hormones, estrogen readily diffuses across the cell membrane. Once inside the cell, it binds to and activates estrogen receptors which in turn modulate the expression of many genes. 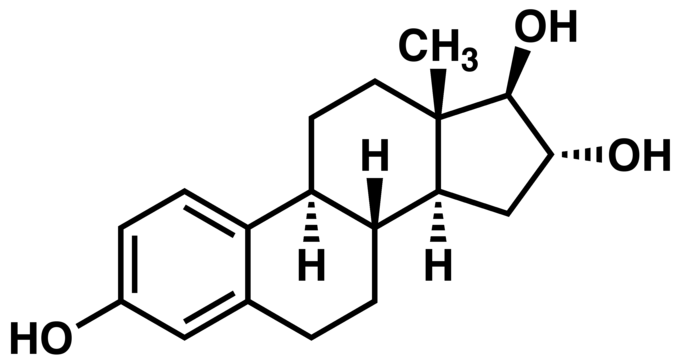 Estriol: Another one of the three main estrogens produced in humans.

While estrogens are present in both men and women, they are usually at significantly higher levels in women of reproductive age. They promote the development of female secondary sexual characteristics, such as breasts, pubic hair, and female fat distribution. They are also involved in the thickening of the endometrium and other aspects of menstrual cycle regulation.

Other functions of and structural changes induced by estrogen include:

Sex drive is dependent on androgen levels only in the presence of estrogen. Without estrogen, free testosterone levels actually decrease sexual desire, as demonstrated in women who have hypoactive sexual desire disorder. The sexual desire in these women can be restored by administration of estrogen through oral contraceptives.

Progesterone: Belongs to the progestogen class of hormones and is the predominant example in the human body.

Progesterone is a steroid hormone involved in the female menstrual cycle, pregnancy (supports gestation ), and embryogenesis of humans and other species.

Progesterone has a number of physiological effects that are amplified in the presence of estrogen. Estrogen, through estrogen receptors, upregulates the expression of progesterone receptors. Also, elevated levels of progesterone potently reduce the sodium-retaining activity of aldosterone, resulting in natriuresis and a reduction in extracellular fluid volume. Progesterone withdrawal, on the other hand, is associated with a temporary increase in sodium retention (reduced natriuresis, with an increase in extracellular fluid volume) due to the compensatory increase in aldosterone production. This combats the blockade of the mineralocorticoid receptor by the previously-elevated level of progesterone.

Progesterone has key effects via non-genomic signalling on human sperm as they migrate through the female tract before fertilization occurs, though the receptor(s) as yet remain unidentified. Detailed characterization of the events occurring in sperm in response to progesterone has shed light on intracellular calcium transients, maintained changes, and slow calcium oscillations, now thought to possibly regulate motility.

Progesterone is sometimes called the “hormone of pregnancy” and has many roles relating to fetal development. It converts the endometrium to its secretory stage to prepare the uterus for implantation. At the same time, it affects the vaginal epithelium and cervical mucus, making them thick and impenetrable to sperm.

If pregnancy does not occur, progesterone levels will decrease, leading to menstruation. Normal menstrual bleeding is progesterone-withdrawal bleeding. If ovulation does not occur and the corpus luteum does not develop, its levels may be low, leading to anovulatory dysfunctional uterine bleeding. During implantation and gestation, progesterone appears to decrease the maternal immune response to allow for the acceptance of the pregnancy and decrease contractility of the uterine smooth muscle.

In addition, progesterone inhibits lactation during pregnancy. A drop in its levels is facilitates the onset of labor. Another drop following delivery is one of the triggers for milk production. The fetus metabolizes placental progesterone in the production of adrenal steroids.