The extra-embryonic coelom is a cavity that contains the chorion. It is located between Heuser’s membrane and the trophoblast.

Development of the Extra-Embryonic Coelom 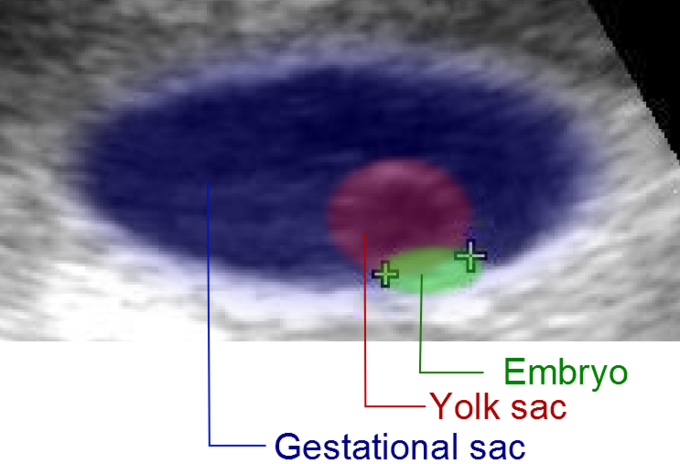 Gestational sac: An artificially colored image of the contents in the cavity of the uterus seen at approximately 5 weeks of gestational age by obstetric ultrasonography.

The extra-embryonic coelom (or chorionic cavity) is a portion of the conceptus consisting of a cavity between Heuser’s membrane and the trophoblast. During the formation of the primitive yolk sac, some of the migrating hypoblast cells transdifferentiate into mesenchymal cells that fill the space between Heuser’s membrane and the trophoblast to form the extra-embryonic mesoderm.

The chorion is one of the membranes that exist during pregnancy between the developing fetus and the mother. It consists of an extra-embryonic mesoderm and two layers of trophoblast and surrounds the embryo and other membranes.

Villi emerge from the chorion, which invade the endometrium, destroy the uterine decidua, and allow the transfer of nutrients from maternal blood to fetal blood.

Chorionic villi are at first small and nonvascular, and consist of only trophoblast, but they increase in size and branch. Blood is carried to the villi by the paired umbilical arteries, which branch into chorionic arteries and enter the chorionic villi as cotyledon arteries.

After circulating through the capillaries of the villi, the blood is returned to the embryo by the umbilical veins. Until about the end of the second month of pregnancy, the villi cover the entire chorion, and are almost uniform in size; but, after this stage, they develop unequally.