The infant’s head and shoulders must go through a specific sequence of maneuvers in order to pass through the ring of the mother’s pelvis. The six phases of a typical vertex (head-first presentation) delivery are:

The Bishop score defines several factors that midwives and physicians use to assess the laboring mother’s progress.
The score is used to predict whether the mother is likely to spontaneously progress into the second stage of labor and whether induction of labor will be required. It has also been used to assess the odds of spontaneous preterm delivery.

The first stage of labor classically starts when the effaced (thinned) cervix is 3 cm dilated, although there is variation as some women may or may not have active contractions prior to reaching this point. The onset of actual labor is defined when the cervix begins to progressively dilate. Rupture of the membranes or a bloody discharge may or may not occur at or around this stage.

The presenting fetal part is then permitted to descend. Full dilation is reached when the cervix has widened enough to allow passage of the baby’s head, around 10 cm dilation for a term baby. The duration of labor varies widely, but the active phase averages some 20 hours for women giving birth to their first child (primiparae), and 8 hours for women who have already given birth (multiparae).

Active phase arrest is defined, in a primigravid woman, as the failure of the cervix to dilate at a rate of 1.2 cm/hr over a period of at least two hours. This definition is based on Friedman’s Curve, which plots the typical rate of cervical dilation and fetal descent during active labor. Some practitioners may diagnose failure to progress, and consequently, perform a caesarean.

At the beginning of the normal second stage, the head is fully engaged in the pelvis: the widest diameter of the head has passed below the level of the pelvic inlet. The fetal head then continues descending into the pelvis, below the pubic arch, and out through the vagina.

This is assisted by the additional maternal efforts of bearing down or pushing. The fetal head is seen to crown as the labia part. At this point, the woman may feel a burning or stinging sensation. The complete expulsion of the baby signals the successful completion of the second stage of labor.

The second stage of birth will vary by factors including parity, fetal size, anesthesia, or the presence of infection. Longer labors are associated with declining rates of spontaneous vaginal delivery and increasing rates of infection, perineal laceration, obstetric hemorrhage, as well as need for intensive care of the neonate.

Placental expulsion can be managed actively, by giving a uterotonic, such as oxytocin, along with appropriate cord traction and fundal massage to assist in delivering the placenta by a skilled birth attendant. Alternatively, it can be managed expectantly, allowing the placenta to be expelled without medical assistance. The umbilical cord is routinely clamped and cut in this stage, but it would normally close naturally even if not clamped and cut.

When the amniotic sac has not ruptured during labour or pushing, the infant can be born with the membranes intact. This is referred to as being born in the caul. The caul is harmless and its membranes are easily broken and wiped away. With the advent of modern interventive obstetrics, the artificial rupture of the membranes has become common, so babies are rarely born in the caul (en-caul birth).

The fourth stage of labor is a term used in two different senses: 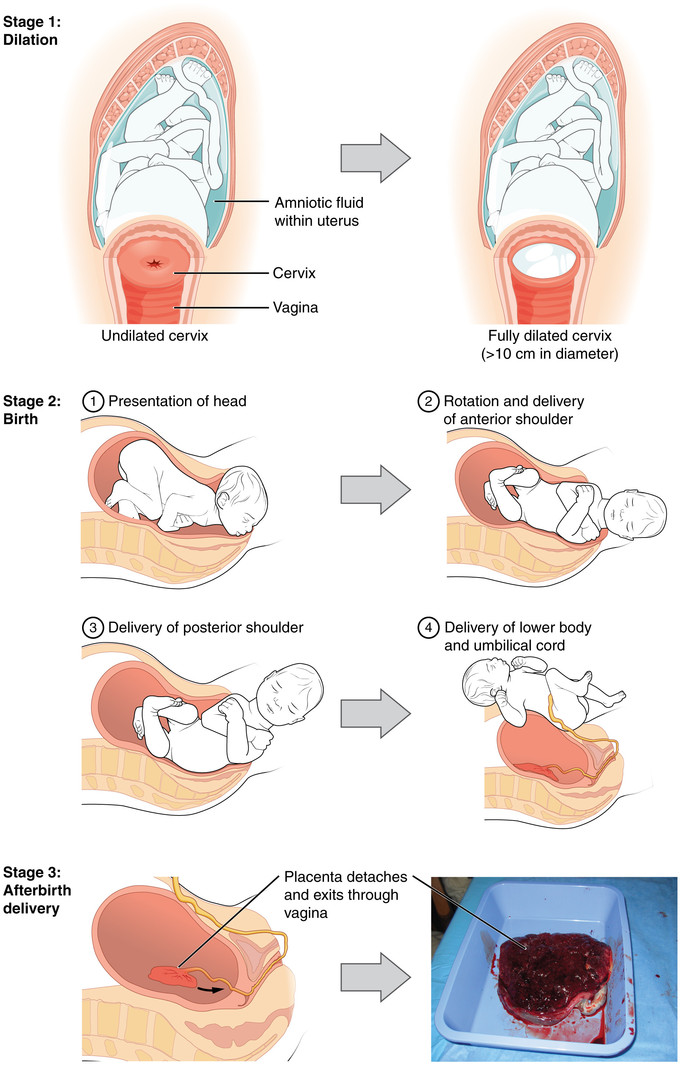 Birth.: A sequence of images showing the stages of ordinary childbirth.