DNA packaging is an important process in living cells. Without it, a cell is not able to accommodate the large amount of DNA that is stored inside.

A eukaryote contains a well-defined nucleus, whereas in prokaryotes the chromosome lies in the cytoplasm in an area called the nucleoid. In eukaryotic cells, DNA and RNA synthesis occur in a separate compartment from protein synthesis. In prokaryotic cells, both processes occur together. What advantages might there be to separating the processes? What advantages might there be to having them occur together? 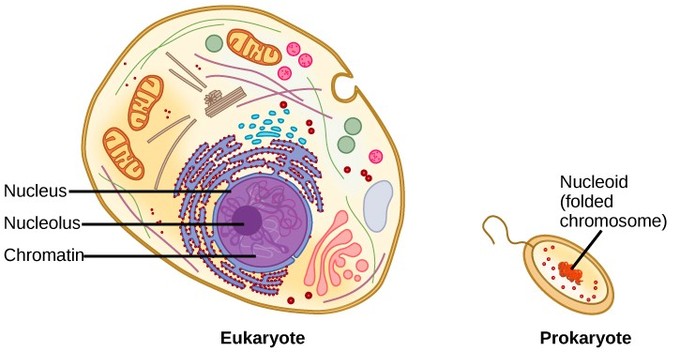 Eukaryotic and prokaryotic cells: A eukaryote contains a well-defined nucleus, whereas in prokaryotes, the chromosome lies in the cytoplasm in an area called the nucleoid.

The size of the genome in one of the most well-studied prokaryotes, E.coli, is 4.6 million base pairs (approximately 1.1 mm, if cut and stretched out). So how does this fit inside a small bacterial cell? The DNA is twisted by what is known as supercoiling. Supercoiling means that DNA is either under-wound (less than one turn of the helix per 10 base pairs) or over-wound (more than 1 turn per 10 base pairs) from its normal relaxed state. Some proteins are known to be involved in the supercoiling; other proteins and enzymes such as DNA gyrase help in maintaining the supercoiled structure.

Eukaryotes, whose chromosomes each consist of a linear DNA molecule, employ a different type of packing strategy to fit their DNA inside the nucleus. At the most basic level, DNA is wrapped around proteins known as histones to form structures called nucleosomes. The histones are evolutionarily conserved proteins that are rich in basic amino acids and form an octamer. The DNA (which is negatively charged because of the phosphate groups) is wrapped tightly around the histone core. This nucleosome is linked to the next one with the help of a linker DNA. This is also known as the “beads on a string” structure. This is further compacted into a 30 nm fiber, which is the diameter of the structure. At the metaphase stage the chromosomes are at their most compact, approximately 700 nm in width, and are found in association with scaffold proteins. 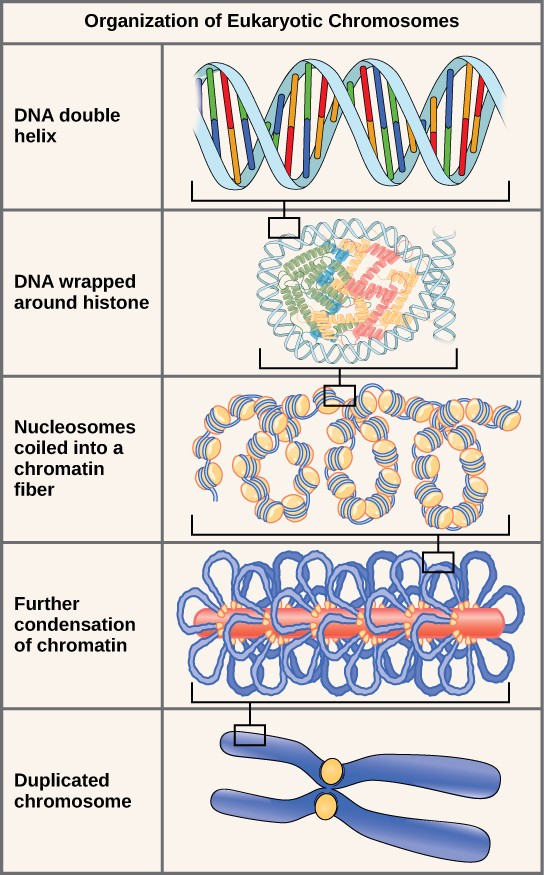